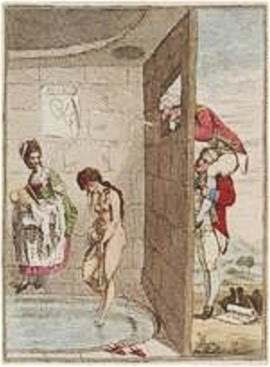 In 1782, London society was scandalized by and eagerly followed the sensational trial of George Bisset for criminal conversation with Lady Worsley. It was one of the first celeb divorce cases and was brought about by Sir Richard Worsley, who demanded £20.000 in damages. He won the case, but he only got one shilling. The transcript of the trial was so popular that it reached seven printings in just one year and satirical prints abounded everywhere. So, what happened?

Sir Richard Worsley was a MP and governor of the Isle of Wight. In 1775, he married Seymour Fleming, a rich heiress and a lady popular in good society, and the couple had two children: a boy named Robert Edwin born shortly after their marriage and a daughter, Jane, born in 1871. On the outside, they seemed like the perfect family. But appearances can be deceiving. Sir Richard wasn’t very interested in his wife and so Lady Worsley started having affairs with a number of men. According to the rumours, not less than 27. 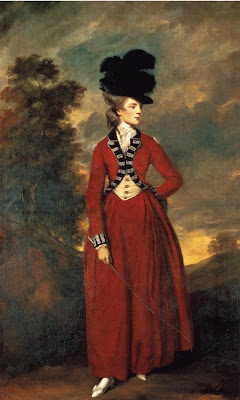 And then, while on the Isle of White, she met George Bisset, a friend of her husband. Things between the pair got serious. Lady Worsley gave birth to George’s daughter, whom Sir Richard recognized as his own, and in 1781, the two lovers eloped together. This was too much to bear for Sir Richard. Humiliated, instead than granting his wife a quick divorce, he sued Bisset for an enormous sum which would have ruined him. Lady Worsley and George Bisset were discovered in London and there was no doubt of their guilt. But he defended himself saying that Sir Richard not only knew about his wife’s infidelities but that he also approved and encouraged them!

And so the trial started and several men gave evidence about their relationship with Lady Worsley. But what caused the biggest scandal was the evidence given by a woman working at the baths at the Coxheath military camps. She claimed that while Lady Worsley was bathing, Sir Richard informed her that Bisset was looking at her. And he could only have done so by standing on Sir Richard’s shoulders! Here’s her testimony:

Mary Marriott deposed, that Lady Worsley used to come to the cold bath, near Maidstone, to bathe, and that she used to attend her; that Sir Richard and Mr. Bissett were generally with her; and that the last time she came, which was about noon, in September last, and at the latter end of the hop-season, Sir Richard and Mr. Bissett staid at the door without, while she bathed; that after she had bathed, she retired into a corner to put on her shift, as Ladies usually do after bathing, and then returned to dress herself, and sat herself down on the seat: that there is a window over the door of the building in which the bath is, and which is the only inlet for light into the bath, and from which any person, who is sitting down on the seat, may be seen, but not when retired into the corner; that when she had almost finished dressing herself, Sir Richard tapped at the door, and said, “Seymour! Seymour! Bissett is going to get up to look at you,” or words to that effect; and looking round, she saw his face at the window: that he continued there about five minutes; that she did not see the Plaintiff on the outside, but believes he must help the Defendant up; and that after Lady Worsley had dressed herself, she went out, and they were all merry and laughing together: that, excepting this, she never saw any improper conduct or behaviour in the said three persons, unless what is above stated may be thought so.
In addition to this, there was another Affidavit read, in which she believed that Mr Bisset could not have got up to the window, unless he had been assisted by Sir Richard, or stood upon his shoulders; and that Sir Richard might easily have pulled him down if he pleased.

Cartoonist had a field day with it, as you can well imagine! The jury debated for nearly an hour before reaching a verdict. Sir Richard won but because he had been practically prostituting his wife, he was only given one shilling in damages. After this, he refused to divorce his wife, seeking only a separation. Because they could not marry, Lady Worsley and Bisset split up. Seymour was left with very little money, no jewelry and no access to her children. To survive, she became the mistress of several rich men. She regained control of her fortune only after Sir Richard’s death. By then, though, her two children had already died. Lady Worsley eventually got married again, this time to a much younger man.