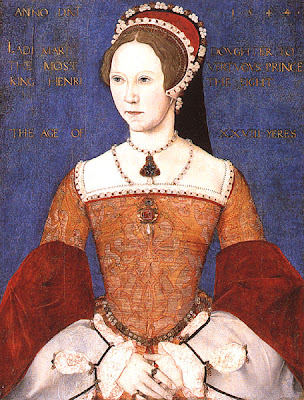 She is of low rather than of middling stature, but, although short, she has not personal defect in her limbs, nor is any part of her body deformed. She is of spare and delicate frame, quite unlike her father, who was tall and stout; nor does she resemble her mother, who, if not tall, was nevertheless bulky. Her face is well formed, as shown by her features and lineaments, and as seen by her portraits. When younger she was considered, not merely tolerably handsome, but of beauty exceeding mediocrity. At present, with the exception of some wrinkles, caused more by anxieties than by age, which makes her appear some years older, her aspect, for the rest, is very grave. Her eyes are so piercing that they inspire not only respect, but fear in those on whom she fixes them, although she is very shortsighted, being unable to read or do anything else unless she has her sight quite close to what she wishes to peruse or to see distinctly.

Her voice is rough and loud, almost like a man’s, so that when she peaks she is always heard a long way off. In short, she is a seemly woman, and never to be loathed for ugliness, even at her present age, without considering her degree of queen. But whatever may be the amount deducted from her physical endowments, as much more may with truth, and without flattery, be added to those of her mind, as, besides the facility and quickness of her understanding, which comprehends whatever is intelligible to others, even to those who are not of her own sex (a marvellous gift for a woman), she is skilled in five languages, not merely understanding, but speaking four of them fluently – English, Latin, French, Spanish, and Italian, in which last, however, she does not venture to converse, although it is well known to her; but the replies she gives in Latin, and her very intelligent remarks made in that tongue surprise everybody….

Besides woman’s work, such as embroidery of every sort with the needle, she also practices music, playing especially on the clavichord and on the lute so excellently that, when intent on it…she surprised the best performers, both by the rapidity of her hand and by her style of playing. Such are her virtues and external accomplishments. Internally, with the exception of certain trifles, in which, to say the truth, she is like other women, being sudden and passionate, and close and miserly, rather more so than would become a bountiful and generous queen, she in other respects has no notable imperfections; whilst in certain things she is singular and without an equal, for not only is she brave and valiant, unlike other timid and spiritless women, but she courageous and resolute that neither in adversity nor peril did she ever even display or commit any act of cowardice or pusillanimity, maintaining always, on the contrary, a wonderful grandeur and dignity, knowing what became the dignity of a sovereign as well as any of the most consummate statesmen in her service; so that from her way of proceeding and from the method observed by her (and in which she still perseveres), it cannot be denied that she shows herself to have been born of truly royal lineage.

[She is also subject to] a very deep melancholy, much greater than that to which she is constitutionally liable, from menstrous retention and suffocation of the matrix to which, for many years, she has been often subject, so that the remedy of tears and weeping, to which from childhood she has been accustomed, and still often used by her, is not sufficient; she requires to be blooded either from the foot or elsewhere, which keeps her always pale and emaciated.