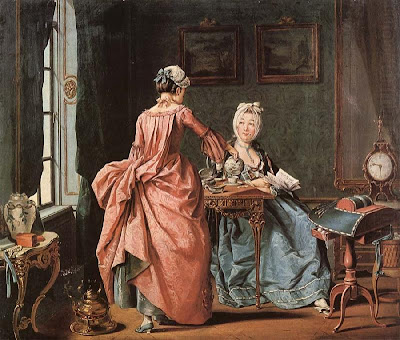 Life Takes Lemons has an interesting post about the life of a lady’s maid. To quote:

A lady’s maid’s day, unlike that of her peers, starts as soon as her mistress wakes. The hour is variable, depending on the individual mistress and whether the household resides in the city or the country, but generally, a lady’s maid begins her official work later than the rest of the servants.

Attending to her mistress’s person comprises the first task of the morning. After ablutions are taken care of and her mistress’s hair and body are dressed, a lady’s maid is responsible for tidying her mistress’s rooms. This may not be the case with experienced ladies’ maids, but in households where there are few servants or a lady’s maid is relatively new, learning the finer details of upkeep are an important part of her position. Even after a lady’s maid has graduated from general housemaid duty, washing hair combs, removing stains from soiled garments, and starching muslins number among the many exigencies of personal attendance that must be addressed on a regular basis. […]

A lady’s maid enjoys more freedom than the average domestic. Once her day’s work is complete, she has leave to improve her mind by reading. Along with other activities such as sewing, her evening hours are largely devoted to leisure. This is both a blessing and a curse. Because ladies’ maids experience privileges denied other domestics and they appear to have the ear of their mistress, they were often subject to jealousy from their peers.

Another downside of the position is that ladies’ maids seem to have more down time than the rest of the household. In reality, they are at the beck and call of mistresses who keep late hours. Suffice it to say, a lady’s maid does not sleep until her mistress does. The life of a lady’s maid, then, revolves around the schedule, temperament, and demands of her mistress.