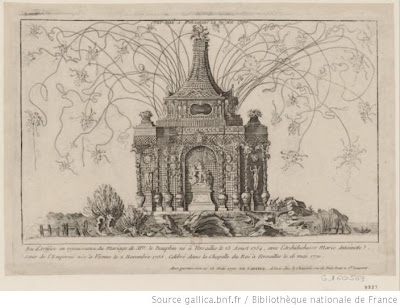 To celebrate the wedding of the Dauphin Louis to the young archduchess Marie Antoinette, a firework display was given on the place de la Concorde. Unfortunately, it ended in tragedy. In his biography of Marie Antoinette, Charles Duke Yonge recalls the accident and how the royal couple tried to help the victims:

Little as was the good-will which subsisted between Louis XV. and the Parisians, the civic authorities thought their own credit at stake in doing appropriate honor to an occasion so important as the marriage of the heir of the monarchy, and on the 30th of May they closed a succession of balls and banquets by a display of fire-works, in which the ingenuity of the most celebrated artists had been exhausted to outshine all previous displays of the sort. Three sides of the Place Louis XV. were filled up with pyramids and colonnades. Here dolphins darted out many-colored flames from their ever-open mouths. There, rivers of fire poured forth cascades spangled with all the variegated brilliancy with which the chemist’s art can embellish the work of the pyrotechnist.

The centre was occupied with a gorgeous Temple of Hymen, which seemed to lean for support on the well-known statue of the king, in front of which it was constructed; and which was, as it were, to be carried up to the skies by above three thousand rockets and fire-balls into which it was intended to dissolve. The whole square was packed with spectators, the pedestrians in front, the carriages in the rear, when one of the explosions set fire to a portion of the platforms on which the different figures had been constructed. At first the increase of the blaze was regarded only as an ingenious surprise on the part of the artist. But soon it became clear that the conflagration was undesigned and real; panic-succeeded to delight, and the terror-stricken crowd, seeing themselves surrounded with flames, began to make frantic efforts to escape from the danger; but there was only one side of the square uninclosed, and that was blocked up by carriages.

The uproar and the glare made the horses unmanageable, and in a few moments the whole mass, human beings and animals, was mingled in helpless confusion, making flight impossible by their very eagerness to fly, and trampling one another underfoot in bewildered misery. Of those who did succeed in extricating themselves from the square, half made their way to the road which runs along the bank of the river, and found that they had only exchanged one danger for another, which, though of an opposite character, was equally destructive. Still overwhelmed with terror, though the first peril was over, the fugitives pushed one another into the stream, in which great numbers were drowned. The number of the killed could never be accurately ascertained: but no calculation estimated the number of those who perished at less than six hundred, while those who were grievously injured were at least as many more.

The dauphin and dauphiness were deeply shocked by a disaster so painfully at variance with their own happiness, which, in one sense, had caused it. Their first thought was, as far as they might be able, to mitigate it. Most of the victims were of the poorer class, the grief of whose surviving relatives was, in many instances, aggravated by the loss of the means of livelihood which the labors of those who had been cut off had hitherto supplied; and, to give temporary succor to this distress, the dauphin and dauphiness at once drew out from the royal treasury the sums allowed to them for their private expenses for the month, and sent the money to the municipal authorities to be applied to the relief of the sufferers. But Marie Antoinette did more. She felt that to give money only was but cold benevolence; and she made personal visits to many of those families which had been most grievously afflicted, showing the sincerity of her sympathy by the touching kindness of her language, and by the tears which she mingled with those of the widow and the orphan.