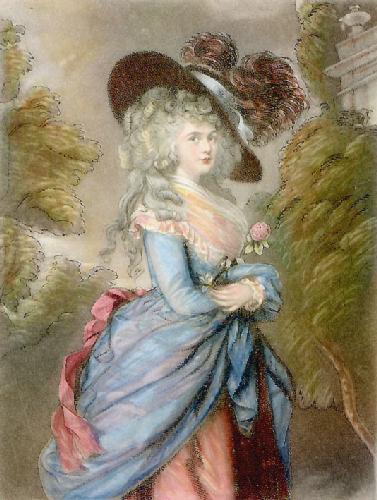 When, in April 1776, English author Fanny Burney met Georgiana, the Duchess of Devonshire, at the park, she wasn’t too impressed. Here’s what she wrote to Samuel Crisp:

Mr. Burney, Hetty and I took a walk in the Park on Sunday morning, where, among others, we saw the young and handsome Duchess of Devonshire, walking in such an undressed and slaternly manner as in former times Mrs. Rishton might have done in Chesington Garden. Two of her curls came quite unpinned, and fell lank on one of her shoulders; one shoe was down at heel, the trimming of her jacket and coat was in some places unsown; her cap was awry; and her cloak, which was rusty and powdered, was flung half on and half off.

Had she not had a servant in a superb livery behind her, she would certainly have been affronted. Every creature turned back to stare at her. Indeed I think her very handsome, and she has a look of innocence and artlessness that made me quite sorry she should be so foolishly negligent of her person. She had hold of the Duke’s arm, who is the very reverse of herself, for he is ugly, tidy, and grave.

Omai*, who was in the Park, called here this morning, and says that he went to her Grace, and asked her why she let her hair go in that manner! Ha, ha, ha ! Don’t you laugh at her having a lesson of attention from an Otaheitan?