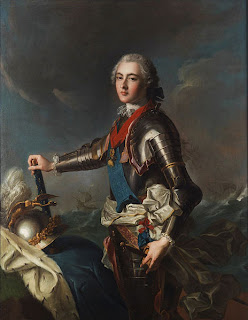 The Duke of Penthievre, Princess De Lamballe’s father-in-law, adored his grandchildren and often gave them presents. The Duke was usually very punctilious in his choice of gifts, but there was one he didn’t examine very carefully before giving it to his little granddaughter, which caused him great embarrassment:

There were no New Year’s gifts this year about which more has been said than about those which Monsieur le Due de Penthievre sent to Mademoiselle d’Orleans, his granddaughter. This is the story: Having deigned himself to visit all our great toy-shops, his Highness decided finally on a beautiful little palace, which in every respect seemed worthy of his preference. The idea was a novel one, and its workmanship was as elegant as ingenious; thanks to the play of a spring, easy to handle, all the windows of the palace opened one after another and there were seen innumerable numbers of the sweetest dolls in the world. This gift, carried to the little princess at the convent of Belle Chasse, soon became an object of admiration to all the nuns, who gathered around to see it. One of the youngest nuns in particular could not keep from looking at it. After examining it in detail and trying all its springs she finally perceived a small secret button which had not yet been touched; her finger quickly pressed it. Great heavens, what a strange surprise! All the dolls, which until then had appeared, were at once replaced by piquant figures of the Aretin*. The scandal throughout the entire community was great, no doubt, but it is said that even the piety of the Mother Superior could not prevent her from smiling when she saw what hands the devil had dared to use in order to play such a trick. The toy merchant was deservedly censured, but he protested his innocence, and, impertinent as the whole conception was, it was easily proved that chance alone was to blame.