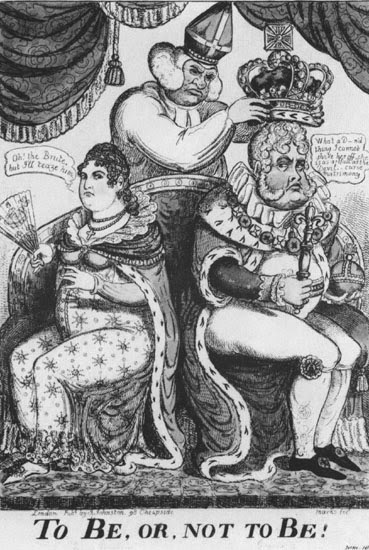 To say that King George IV and his consort, Caroline of Brunswick had never got on well would be an understatement. The two separated soon after their wedding, but never stopped trying to make life hell for each other. George, in particular, was keen on getting rid of his wife and tried several times to divorce her or annull their marriage, but without luck. When he became King in 1820, he was adamant Caroline, who had technically become Queen, wouldn’t stand at his side.

After trying to bribe her to stay away, but without success, he got Parliament to introduce the Bill of Pains and Penalties to dissolve the marriage. There was a trial, in which Caroline’s infidelity was proven. The bill was then passed, by a small majority in the House of Lords, but it dropped because of its unpopularity. A large section of the press and public, in fact, were appalled at George’s behaviour and sided with his slighted Queen.

Caricaturists obviously had a field day covering what became known as the Queen Caroline Affair. Here are a couple of prints that were published at the time:

The Secret Insult, or Bribery and Corruption Rejected 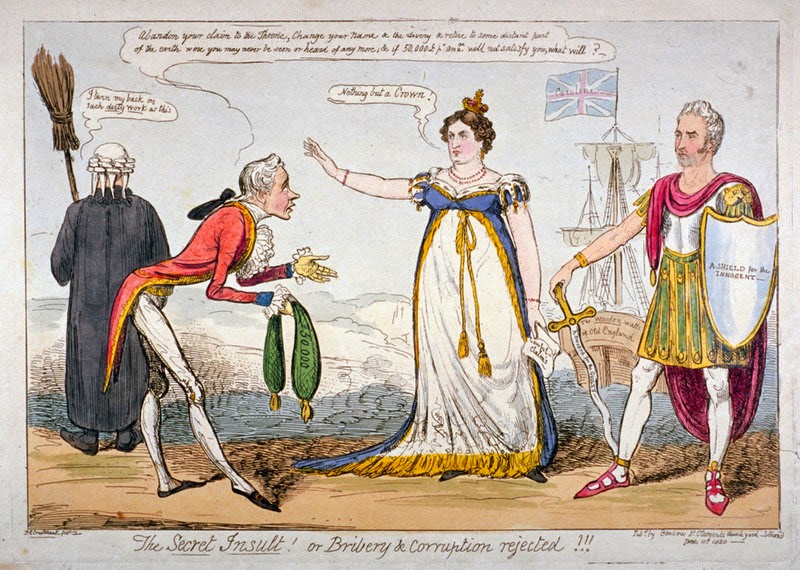 Among the caricatures on the popular side in connection with the queen’s trial in 1820, we find one by Robert*, entitled, The Secret Insult, or Bribery and Corruption Rejected, which has reference to the overtures which, as we have seen in the previous chapter, were made to her by the ministers in the hope of avoiding, if possible, a public exposure; and here Lord Liverpool is represented in the act of offering to Her Majesty a purse. “Abandon,” he says, “your claim to the throne, change your name and the livery, and retire to some distant part of the earth, where you may never be seen or heard of any more; and if £50,000 per annum will not satisfy you—what will?” To which the queen (who assumes an appearance of virtuous indignation) replies, “Nothing but a crown.” Brougham turns his back, saying, “I turn my back on such dirty work as this,” the fact being, as we have seen, that he had really entered into negotiations with the ministers on the queen’s behalf, which she afterwards angrily repudiated. The devil pats him on the back. “Well done, Broom,” he says; “you have done your business well.” By the side of the queen stands a figure, possibly meant for Alderman Wood, carrying “a shield for the innocent,” and “a sword for the guilty”; behind her in the distance is a ship, bearing the title of “The Wooden Walls of Old England.” 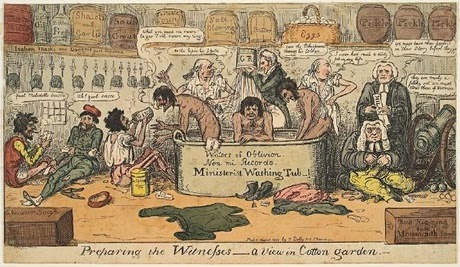 Those who saw them before they were housed in Cotton Garden, describe them as swarthy, dirty looking fellows, in scanty ragged jackets and greasy leathern caps; at the bar of the House, however, they looked as respectable as fine clothes and soap and water could make them. To this a caricature of Robert’s, entitled, Preparing the Witnesses—a View in Cotton Garden, refers. Three dirty foreigners are being washed, with no satisfactory result, in a bath labelled, “Waters of Oblivion,” “Non Mi Ricordo,”** and “Ministerial Washing Tub.” One of the operators (probably the Attorney-General, Sir Robert Gifford) remarks that “he never had such a dirty job in his life”; seated around are a number of equally dirty foreigners awaiting their turn.