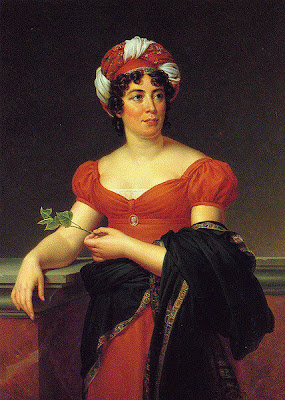 In pre-revolutionary France, conversation was an art. Word games, making up poems or conundrums, jokes and debates were all favourite pastimes that stimulated conversation and kept the brain sharp. Madame de Stael was fond of them too:

Germaine de Stael’s favourite game was called the Boat, in which everyone present was asked who they would save from a sinking ship. She asked her first lover, Talleyrand, who he would rescue, her or his other mistress Adele de Flauhaut. He replied that she was so talented she could extricate herself from any predicament; gentility would oblige him to save the resourceless Adele. Another version of this story has Germaine and Talleyrand actually in a boat, talking about devotion and courage. To her question as to what he would do if she fell in, he reportedly replied, “Ah, Madame, you must be such a good swimmer.”