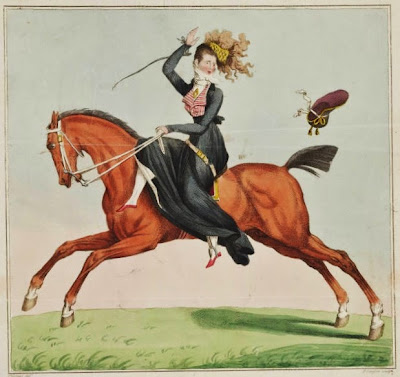 The daughter of a Norwich watchmaker, Alicia Meynell was born in 1782. She had an older sister, who married William Flint of Yorkshire. It is likely through them that Alicia met her lover. Lieutenant-Colonel Thomas Thornton was a dashing and respected neighbour of the Flints. Maybe they bonded over their shared love for horses and riding. Alicia owned three hunters and liked riding to hounds, something very few women did back then. Riding fast over uneven, unpredictable terrain wasn’t easy in a side saddle, after all. But Alicia did it, and did it very well too.

William loved horses as well. One day, he went riding with Alicia and soon, the two started wondering which of their two horses was better. Was Vingarillo, a brute and her Thornton’s favourite horse, better and faster than Thornville, Flint’s brown hunter and favourite animal? Only a race could settle the argument. And so, off they rode. Twice. Both times, Alicia won. A sore loser, Flint challenged her to ride at a real race, namely the Newmarket Race Track. He also named a prize of 1,000 guineas, which, in today’s money, is about $30.000!

If he thought she’d decline, he was disappointed. Alicia was all too eager to accept. News spread fast and, on the appointed day, a big crowd gathered to see a woman race. Now, that was a spectacle you didn’t see every day! The crowd grew so big that the 6th Light Dragoons were called in to keep everyone under control. The crowd behaved. It was the bets that went crazy. Overall, more than 200 pounds (more than $6 millions in today’s money) was betted! 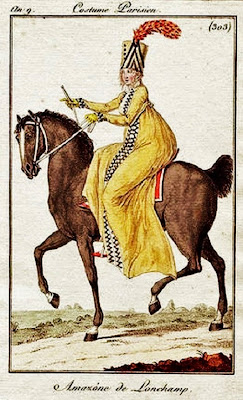 Finally, the riders stepped forward. Alicia, with her spotted dress that resembled leopard skin, blue sleeves and cap, cut a striking figure. Her opponent, William, was soberly dressed in white from head to toe. His past defeats were still on his mind. He ordered Alicia to ride on a side of the track where she wouldn’t be able to use her whip hand, and didn’t allow anyone to ride alongside her and help her should her side saddle slip. Alicia didn’t mind. When the race finally started, she soon jumped ahead. She kept her advantage till the very end, when Vingarillo suddenly faltered, allowing Thornville to surpass him. William had won the race.

Alicia didn’t took it well. And she was even less happy of hearing everyone prais Flint for being such a gentleman to have raced with a woman in the first place. So, she took up her pen and wrote a letter to the Herald in which she denounced William and requested a rematch. But nothing came of it. Whether it was because he knew his success had been due more to luck than ability, or his resentment at Alicia’s lover who refused to honour the bet, insisting it had all been a joke, William refused to race. 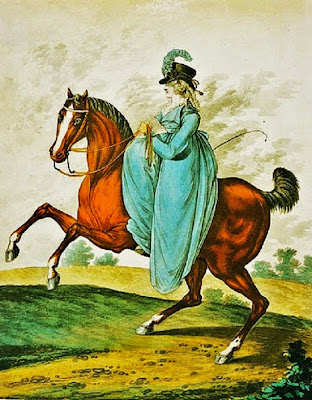 But a certain Mr Bromford challenged Alicia to ride at the next year’s race. The prize? 2000 pounds and lots of French wine. Of course she agreed. But the race never took place. On the appointed day, Bromford suddenly left, so Alicia won by default. But she got to race against Buckle, one of the best paid jockeys of the time. Riding a mare named Louisa, “Mrs. Thornton, by the most excellent horsemanship, pushed forward and came in in a style far superior to anything of the kind we have ever witnessed, gaining her race by half a neck.”

Alicia’s ability wasn’t the only thing to attract everyone’s attention at the race. William may have refused to race against her again, but he was at the event, and horsewhipped Thornton. He was quickly confined for assault. That wasn’t the end of the feud, though. The two men battled it out in court for years, and eventually, Colonel Thornton won.

Shortly after the second race, Thornton and Alicia broke up. In 1806, she eloped with a soldier. But it’s for her achievement, not her love life, that she is still remembered today. She remained the only woman listed in the records of England’s Jockey Club to have raced and won against a man until 1943.