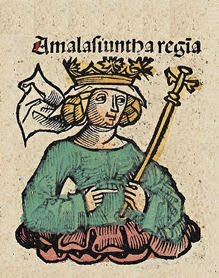 Amalasuntha, born around 495, was the only daughter of Theodoric the Great, king of the Ostrogoths, and his wife Audofleda. Amalasuntha was both beautiful and smart. She grew up in Ravenna, which was a political and cultural centre at the time, and received an extraordinary education. She spoke both Latin and Italian fluently, in addition to her native language of course, and was very erudite and knowledgeable.

In 1515, she married Eutharic, a Visigoth prince from Iberia (modern day Spain). Their marriage was supposed to unite their kingdoms after Theodoric’s death, but he died before that could happen, leaving Amalasuntha with two children, a boy named Athalaric and a daughter called Matasuentha. In 1526, Theodoric died too and the crown passed to Athalaric, while Amalasuntha became regent. Amalasuntha decided her son should have the best Roman education available, but this didn’t go down well with the Goths. They wanted their king to be a warrior, not a scholar and interpreted Amalasuntha’s plan as an attack on their values and culture. Soon, three noblemen plotted to do away with her, but their plans were discovered. They were executed.

Undeterred, Amalasuntha educated her son as she saw fit, but Athalaric lived a life of excesses and drank heavily, which brought him to the grave. He was only 16. Amalasuntha was now queen but she knew she wasn’t popular with the Goths and was afraid they wouldn’t allow a woman to rule over them. So, she invited her cousin Theodahad to share the throne with her and thus, strengthen her position. But this plan backfired. Theodahad accepted the invitation but fomented the Goths’ resentment towards her and within a few months, Amalaunstha was imprisoned in the island of Martana, in the Tuscan lake of Bolsena. But she only spent a few days there. On 30 April 534/535, she was murdered while she bathed.