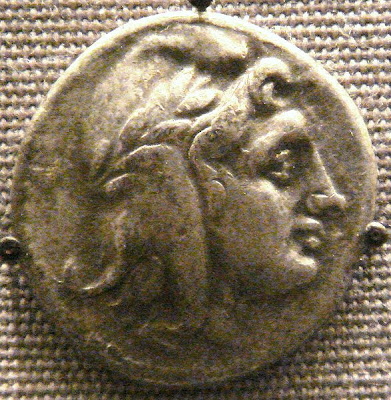 Amastris, also called Amastrine, was the daughter of Oxyathres, the brother of Darius III, King of the Persians. Her date of birth is lost to history and we don’t know anything about her childhood either. But we can imagine how her world must have been shaken when her uncle was defeated by Alexander the Great. Alexander ordered a mass wedding to unite the Persian and Macedonian people and cultures and Amastris was one of the brides. Alexander gave her in marriage to his favourite general Craterus. The wedding took place in 324 BCE. But the marriage didn’t last long. Alexander died the following year and Craterus decided to leave Amastris to marry the woman he loved, Phila, the daughter of Antipater.

Amastris, with the blessing of her ex-husband, married again in 322 BCE. The groom was Dyonisus, tyrant of Heraclea Pontica (Bithynia). She brought a big dowry to her husband, which helped sustain the luxurious lifestyle of the court and the lavish banquets. To say that Dionysus loved food is probably an understatement. He grew so fat that, at some point, he couldn’t actually eat anymore but had to be artificially fed. He finally chocked in his own fat, but not before having conceived three children with his wife: Clearchus, Oxyathres and Amastris. Amastris became their guardian and ruled during their minority.

Because of her position, Amastris now had several suitors eager for her hand in marriage. Eventually, she chose Lysimachus, king of Macedon. The couple married in 302 BCE. It seems that Lysimachus really cared for Amastris but that didn’t stop him from abandoning her shortly after her wedding for a more advantageous match: Arsinoe, daughter of the king of Egypt. Amastris now returned to Heraclea, where she ruled on her own. She also founded a city, called Amastris after her, on the sea-coast of Paphagonia (a region now in modern Turkey). She was also the first woman to issue coins in her own name. Amastris’ sons were now old enough to rule. Soon after they took over power in 284 BCE, they arranged their mother’s murder. When on board a ship, Amastris was drowned. But her sons rule was short. Their mother’s murder brought upon them the vengeance of Lysimachus. He killed both Clearchus and Oxyathres, and then proclaimed himself ruler of Heraclea.

Image:
Didrachm of Amastris. The Queen was the first woman to issue coins in her own name.