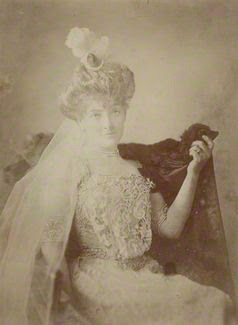 Lady Harriet Julia Jephson, an Englishwoman, was living in Germany when World War I broke out. In a short war diary that she kept during that period and which she later published, titled A War-time Journal, Germany 1914 and German Travel Notes, she described the awful situation she found herself in, being unable tor some time to leave a country that had suddenly become hostile to foreigners, forced to read papers that reported false information about war proceedings and slanders against her native land, wondering what’s gonna happen to her and what the situation in England really was, and having run out of all her money . Here are a few excerpts from her journal:

August 3rd
Alas! all steamers on the Rhine are stopped and motor-cars are impossible, because an order has come out that petroleum is to be reserved for the Government. I made another attempt to cash a cheque to-day, and again the bank refused. A Russian who stood beside me was desperate. He spoke execrable French, and cried excitedly: “Comment donc! je ne puis pas quitter le pays et j’ai une famille et trois femmes!” Poor Bluebeard! his “trois femmes” (wife and daughters) looked terrified and miserable. Our position is incredible and most serious. Still, one cannot but admire the glorious spirit of sacrifice and patriotism which animates all classes of the German people. Just what it was in the war of 1813, when women even cut off their hair and sold it to help their country.

August 5th
Our baker has gone to the war, and Dr. G—— ‘s butler; the schools have shut up, so many masters having been called upon to fight. Even learned professors turn soldiers in this country, and most of the weedy cabhorses here have left Altheim to serve their “Fatherland.” My Bade-Frau’s husband has gone to the front, and so has our Apotheke; there are no porters left at the station, and a jeweller is doing duty as station-master! The Red Cross Society meet daily, and make preparations for the care of wounded men. Hospitals, private houses, and doctors’ houses are getting ready, and all motors have been put at the State’s disposal. Insane hatred against Russia exists, and the Russians here are not enjoying themselves! My position is most serious: no money, and no return ticket! 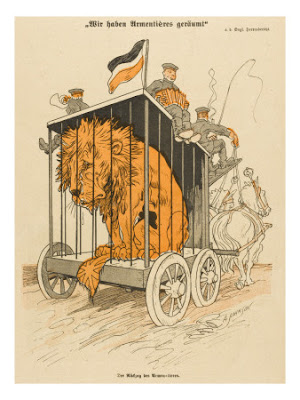 August 7th
Still no help! Innumerable wild rumours are flying about. They say that those who left Altheim have all come back, unable to get farther than Frankfort. We are beginning to feel hopeless. Nothing about England is in the German papers, and, of course, we see no others. It is quite terrible being without news. Last night there was great scrubbing and scraping of Altheim shop windows, and all the notices: “English spoken here” have disappeared.There is a mania about spies in Frankfort, we hear, and some Americans yesterday were very roughly handled because their motor bore a French maker’s name. The Americans have returned to Altheim, and their motor has been taken to fight for the Fatherland! Our situation is dreadful, but we are keeping up brave hearts. Every day a fresh “Bekanntmachung” (notice) appears; that of to-day was addressed to the children and called upon them to gather in the harvest, the workers having gone as soldiers and turned their “pruning hooks” into swords. My postcards written in German have all come back. One cannot communicate with anyone outside Altheim. What a position! God in His mercy help us! It seems so strange to see German troops marching to the tune of “God Save the King,” yet it is Germany’s National Anthem too, and these are the words they sing to it:—
“Heil Dir im Sieger Kranz, Herrscher des Vaterlands, Heil Kaiser Dir!” etc.
A “Warnung” has now been affixed to trees in the Avenue forbidding Russians, English, French or Belgians to go within 100 metres of the station. The Russians are being hardly used, but so far Germans are quite nice to us. Mrs. N—— tells me a gruesome tale of a Russian lady who left her hotel for Russia smiling, well dressed, and happy. At Giessen all Russians were turned out of the train and put into a waiting-room, and locked up there without any convenience of food, drink, or beds for the night. The following morning they were told to come out and soldiers marched them several miles into the country to a farm-house. Some of the poor creatures were faint from want of food, and others had heart disease, and fell exhausted in the road, the soldiers prodding them with their bayonets to make them get up! After several hours’ detention there, they were brought back to Altheim, where the poor lady arrived a pitiable wreck! What an experience! I have been packed up for days! 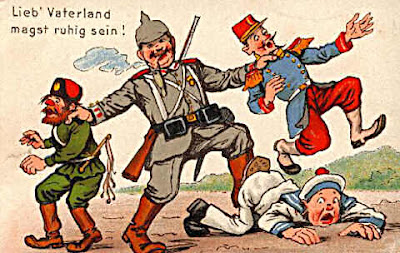 September 5th
The “Times” of the 5th August has turned up in Altheim. It has gone the round of our little community until such a worn, creased remnant reached me, that I had much ado to keep it together until I could master its contents. One felt a second Rip Van Winkle, awaking after a long sleep, our world being so confined here. At last I have discovered how to get money from England. One writes to the American Embassy in Berlin, and encloses a telegram (with postal order for the same) to one’s banker in London, instructing him to pay the sum of money wanted to the American Embassy in London, to be forwarded through their kind offices to the Embassy in Berlin. The telegram to be written on a sheet of foolscap paper, with the full name and address of the sender, and the name also of the nearest American Consul. No letters can be sent through this channel.

September 12th
The Germans seem depressed, no flags, no bands. […] Life in Altheim has changed under war conditions. The Kur Haus is closed, there are no teas on the Terrace or promenadings to the strains of Grieg or Strauss, or theatrical performances. The German Kur-Gäste have left, and only the Russian, English and a few Belgian prisoners of war remain. Russians here are chiefly of a very low class. Most of the women go about bareheaded, and all are rough and unkempt and dirty-looking. I fancy some of them have suffered much privation, but happily their order of release has come. They will have to travel by Denmark, Sweden and across to Petrograd. The weather is autumnal, and they have only summer clothes, like us. We cannot help them, having so little money ourselves. I have had to borrow twice, and tried to sell my jewellery without success, but I have developed a latent and unsuspected talent for laundry work. The pretty summer shops in the Park Strasse are now closed, and the sound of beating mattresses is heard everywhere; the blinds of most of the villas are drawn down, and the families having no longer lodgers have descended to their winter quarters on the ground floor. Only a few einspänners are left, as both Kutschers and horses are gone to meet a “Heldentod” for their Fatherland.
One sees white-capped nurses and Red Cross Ambulance men and wounded and bandaged warriors everywhere. When recovered, the soldiers get three days leave to visit their families, and then return to the Front. Poor souls! Shops are chiefly tended by women nowadays. […] The weather is cold and rainy, and there is no fire-place in my room. 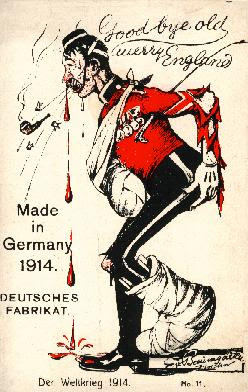 September 22nd
If we may believe such good news we are to be released from this irksome life, and set at liberty next Saturday. Our joy is much damped, however, by hearing that none of the men are to be allowed to leave, and, of course, their wives stay with them. Mr. Ives has made a special journey to Berlin on behalf of our poor men, but the authorities are obdurate.
People say that the loss of life in this terrible war is beyond belief as far as the Germans are concerned. To hide this the Emperor requests that no one shall wear mourning for the dead until the war is over. Also, no complete catalogues of casualties are issued, only lists for each kingdom, or duchy, so that the bulk of the people have no idea of the waste of life. The wounded being so numerous, the doctors now have little time to attend to them on the spot, and therefore they are put into trains and sent off to “Lazaretts” sometimes before even their wounds are washed.Belgian lady who had a special police permit to go to Frankfort, returned this afternoon in a train full of wounded soldiers. One of these was put into her carriage. He had been badly shot in the arm; his sleeve was soaked with blood, and that had coagulated; his wound had never been washed, and French earth was still on his boots, and yet he had been sent in this condition from Rheims to Giessen!

September 23rd
We are much depressed, and our depression is aggravated by the want of occupation here. We dare not sketch for fear of being “verhaftet” (arrested). It is no good writing because every scrap of paper will be taken from us on the frontier; nobody I know plays bridge, and so I read and walk all day long. Miss H—— tells me that a rude young clerk in the “Löwen-Apotheke” refused to talk English to her this morning, “You will have to learn German now, because we shall be in London within a fortnight,” said he! No German I have yet known foresees any other result of this war but success. The Fatherland Commissariat, according to the Italian papers, leaves much to be desired. The unfortunate soldiers are almost starving, and often live for days together on raw carrots, turnips, herbs, or any other vegetable they can root up out of the ground. The doctors are puzzled because men have died of such seemingly slight wounds. One case seemed so incomprehensible that an autopsy was decided on, and a raw root with fragments of earth upon it was found in the poor creature’s stomach. The Russians left at 5 a.m. this morning, men and women. It is more than hard that our poor men should be left behind.

September 24th
Joyfully packing! A last meeting was held at the “Prince of Wales’ Hotel” where kind Mr. S—— presided, and we all received instructions for our journey, and our long detained passports! Fifty women and children go. We sleep in Frankfort, and cross from Flushing to Folkestone. Oh! that terrible mined sea, and the “untersuchung” of the Frontier. I tremble for this Diary, all letters I have destroyed.