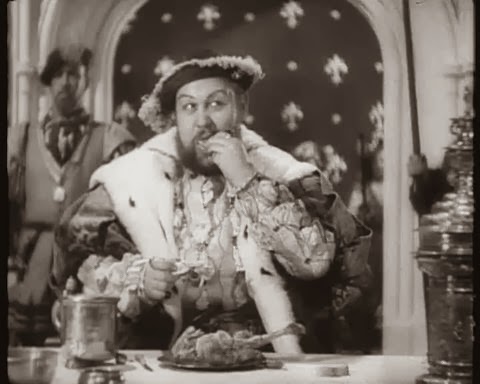 In his later years, Henry VIII, due to the large amount of food he ate at banquets and a nasty wound in his leg that prevented him from exercising, grew fat. Here’s how historian Lingard described the King and the problems his obesity caused him:

“The king had long indulged without restraint in the pleasures of the table. At last he grew so enormously corpulent, that he could neither support the weight of his own body, nor remove without the aid of machinery into the different apartments of his palace. Even the fatigue of subscribing his name to the writings which required his signature, was more than he could bear; and to relieve him from this duty, three commissioners were appointed, of whom two had authority to apply to the paper a dry stamp, bearing the letters of the king’s name, and the third to draw a pen furnished with ink over the blank impression. An inveterate ulcer in the thigh which had more than once threatened his life, and which now seemed to baffle all the skill of the surgeons, added to the irascibility of his temper.”