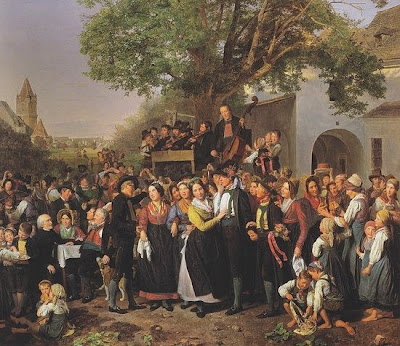 What have ball games got to do with weddings, I hear you ask? Well, in some parts of North England, Scotland and France there was a tradition dictating that the bridegroom had to contribute either a football, or money to buy one, to the local youths or community. It sure sounds like a weird way to celebrate a wedding, doesn’t it? But there’s a reason for it. This custom seems to have derived from the traditions of “paying the footing”, which dictated that someone joining a community (or removing someone from the community, as is the case in some weddings) had to make a donation to it. In this case, the ball was the donation required by the bridegroom to the community. Sometimes, it was the bride who gave the ball to youths.

John Brand, in his Observations on the Popular Antiquities of Great Britain (1777) wrote:

In the North of England, among colliers and others, it is customary for a party to watch the bridegroom’s coming out of the church after the ceremony, in order to demand money for a foot-ball; a claim that admits of no refusal. Coles’s Dictionary adverts to another kind of ball money given by a new bride to her old play-fellows. In Normandy the bride throws a ball over the church, which both bachelors and married men scramble for. 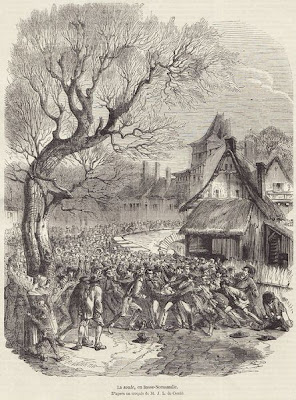 Formerly it was customary when marriages took place in the church of Pettie for the children of the parish school to barricade the door, and refuse admittance to the party till the bridegroom should either make a present of fourpence to buy a new football, or earn exemption from the custom by kicking the ball over the church. If the would-be benedict could not achieve the exploit of kicking the ball, and would not pay the pence, the cleverest fellow might take off the bride’s shoes. Thus degraded, the bridegroom was allowed to enter the church.

In Orkney, Northern Scotland, it was customary, when the bride and groom belonged to different parishes, for the best man to donate or pay for the ball for the children of one of the parishes (usually the bride’s). If for some reason the best men didn’t want to pay, the boys would wait for the wedding party outside the church and, at the end of the ceremony, demand their ball. But was football, or any other ball game actually played at weddings? In some parts of France, yes. The guests played a football game called La Soule and, apparently, injuries often occurred!