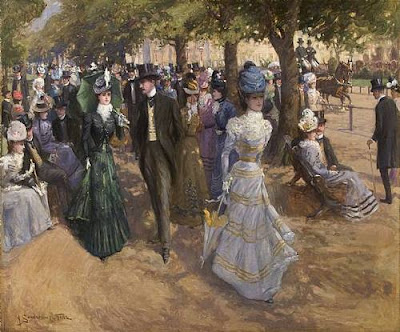 Conduct in public should be characterized by reserve. The promenade, the corridors of public buildings–post-office, railway stations, etc.–the elevators and arcades of buildings devoted to shops and offices; museums and picture-galleries, the foyer of the theatre, and the reading-rooms of public libraries may all be regarded as thorough fares, where the general public is our observant critic. Greetings between acquaintances casually meeting in such places should be quiet and conventional; friends should avoid calling each other by name, and conversation should be confined to such remarks as one does not object to have accidentally overheard. Subdued, but natural, tones of voice should be used, and the manner should be perfectly “open and above board.” Cautious whispering is conspicuous, sometimes suspicious, and always ill-mannered. If confidential matters are to be discussed, the office or the parlor is the proper place for the conference.

When acquaintances meet on the promenade, recognitions are exchanged by a slight bow, with or without a spoken greeting.

On the crowded walk, if two acquaintances pass and re-pass each other several times in the course of the same promenade, it is not necessary to exchange greetings after the first meeting.

Canes and umbrellas should not be carried under the arm horizontally, endangering the eyes and ribs of other pedestrians.

A man, when bowing, lifts his hat in the following instances:
When bowing to a lady.
When, walking with a lady, he bows to another man of his acquaintance.
When bowing to an elderly man, or a superior in office.
When bowing to a man who is walking with a lady.
When, walking with a lady, he joins her in saluting any gentlemen of her acquaintance, but strangers to himself; or, when walking with gentlemen, he joins them in saluting a lady of their acquaintance, but a stranger to himself.
When offering any civility (as a seat in the street-car), to a lady, whether a stranger or an acquaintance.
When bidding good-bye to a lady after an “open-air” conference, when the hat has been worn. Punctilious etiquette requires a man to stand with head uncovered in the presence of ladies, until requested to replace the hat. But in our changeable climate, the risk of “taking cold” suggests the good sense of wearing the hat out-of-doors, and allowing the graceful lifting of the same at greeting and parting to express all the deference that the uncovered head is meant to symbolize.

The greater the crowd, the shorter the range at which greetings are exchanged. One might “halloo” to an old acquaintance forty rods distant, down a country lane; but on Broadway he bows only to the ones whom he meets point blank. 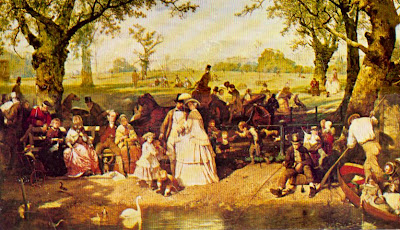 If two friends meet and pause to shake hands, they should step aside from the throng, and not blockade the sidewalk. Ladies should make these pauses very brief, and beware of entering into exhaustive interchanges of family news. Two men may linger, if they choose, and hold a few moments’ conversation. But if a man meets a lady, and wishes to chat with her, he should, after greeting her, ask permission to join her, and walk with her for a short distance; he should by no means detain her standing on the sidewalk. He should not accompany her all the way to her destination, nor prolong such a casual conversation beyond a few moments. He should leave her at a corner, and lift his hat respectfully as he bids her good-bye.

If several people walking together on a sidewalk of average width meet other groups of promenaders, both parties should fall into single line as they pass, allowing each group a fair share of the walk. This is especially incumbent when on a narrow crossing. It is very rude for groups of three or more to walk abreast without heeding the people whom they meet, and often crowding the latter off the curbstone. Young girls are sometimes very thoughtless in this matter. “Turn to the right, as the law directs” is an injunction that holds good for the crowded sidewalk.

If one, walking briskly, overtakes slower walkers ahead, and the crowd allows no space to get past them, one should watch for a chance to slip through a gap in the phalanx, rather than “elbow through.” If no chance seems likely to occur, and haste is imperative, a polite man has no recourse but to step outside the curb and walk rapidly ahead, returning to the sidewalk a few paces in advance. A lady similarly hurried may slip through a small space, if one offers, with an apologetic “I beg pardon.” But in no case should pushing be resorted to. It is very unmannerly for a party of loiterers to string themselves thus across the width of a sidewalk, and then saunter slowly, regardless of the fact that they are impeding the progress of busier people. A policeman should call their attention to the fact.

If the sidewalk is “blocked” by an orderly crowd, as it frequently is on the occasion of parades and other public demonstrations, a man may push his way through gently, saying, “I beg pardon” to those whom he is compelled to jostle. The fine breeding of a gentleman never shows more conspicuously than in his manner of getting through a crowd. The beauty of it is, or, perhaps, I might say, the utility of it is, that courtesy in such a case is very much more effective than “bluff,” for the majority in an orderly crowd are inclined to be obliging, and quickly respond to a good-humored request; whereas, if one aggressive elbow begins to push, a hundred other elbows are set rigidly akimbo, and the solid mass becomes ten-fold more unyielding than before.

If accosted by a stranger with a request for information as to streets, directions, etc., one should kindly reply, and, if not able to give the desired information, should, if possible, direct the stranger where to make further inquiries. Cheerful interest in the perplexities of a bewildered sojourner in the city costs nothing and is always highly appreciated. Only a pessimist or a snob would dismiss such a question curtly. 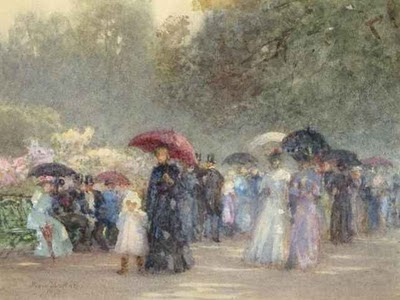 If a lady’s dress has been torn, or trimming or braid ripped and left trailing after contact with the nails in a packing-box on the sidewalk, or from some similar accident, it is polite to call her attention to the disaster. A gentleman may do this with perfect propriety if he sees that she is not aware of it. He should preface the information with “Pardon me,” and should lift his hat, as always when offering any civility.

When attending to business at banks, post-office, railroad ticket-offices, etc., one should pay no attention to other people, further than to guard against allowing one’s absorbing interest in one’s own affairs to make one regardless of the just rights of others in the matter of “turn” at ticket or stamp windows, or in the use of the public desk, pens, etc.–trifling tests of good manners that distinguish the well-bred, and which illustrate very pointedly the truth that selfishness is always vulgar, and that an unfailing habit of considering other people’s comfort is a mark of gentle breeding.

A lady should say “Thank you” to a gentleman who gives up a seat to her in a street-car or other public conveyance, where, having paid for a seat, he has a right to it, and his voluntary relinquishment of it is a matter of personal courtesy on his part. The woman who slides into a place thus offered without acknowledging the obligation is very thoughtless, or else she has erroneous ideas of how far chivalry is bound to be the slave of selfishness. If the lady is accompanied by a gentleman, he, too, should say “Thank you,” and lift his hat. He should also be thoughtful not to take the next vacated seat himself without first offering it to the polite stranger.

A young woman, strong and well, may properly give up her seat to a fragile woman, or a mother with a baby, or to an elderly man or woman.

Young ladies of leisure, who are not weary, should not be too ready to “oust” tired clerks and laboring men whose ride home at six o’clock is their first chance to sit down, for ten hours.

Men who smoke on the street should avoid the crowded promenade, where ladies “most do congregate;” since it is nearly impossible to avoid annoying some one with the smoke.

In most towns, the Board of Health ordinance forbidding spitting on floors, sidewalks, etc., is not only a hygienic safe-guard, but a much needed enforcement of good manners. Comment is superfluous.

Based upon an idea borrowed from olden days–that the right arm, the “sword arm,” should be free for defense–a custom formerly prevailed for a man, walking with a lady, to place her always at his left side. Then later–also with some idea of shielding her from danger–it was the custom for a man to walk next to the curbstone, whether it happened to be left or right. This is still the rule, unless the sidewalk is crowded; in which case a man walks at the side next the opposing throng, in order to shield a lady from the elbows of the passers-by.

Authorities are divided on the subject of elevator etiquette, some denouncing in round terms the man who is so rude as to keep his hat on in an elevator where there are ladies; arguing that the elevator is a “little room,” an “interior,” not a thoroughfare. Others are equally emphatic in asserting that the elevator is a thoroughfare, merely; and that hats are not to be removed, except under the same conditions that would call for their removal in the street–as the greeting of acquaintances, or the exchange of civilities. The good sense of this view is apparent. A hat held in the hand in a crowded elevator is sure to be in the way, and liable to be crushed. A gentleman who wishes to compromise between stolid ignoring of the ladies who are strangers, and superfluous recognition of their presence, may lift his hat and replace it immediately, when a lady enters the elevator, or when he enters an elevator where ladies already are. Such a courtesy differs from a greeting in this: a stranger offering this elevator civility does not look at the lady, nor does he bend his head; and his lifted hat is an impersonal tribute to the sex. A lady makes no response to such a courtesy; yet there is in her general bearing a subtle something, hard to describe, but which every gentleman will readily recognize, that shows whether or not she observes and appreciates his little act of deference. The atmosphere of good manners may be as invisible as the air about us; but we know when we are breathing it.

During a promenade in the day-time, a lady does not take a man’s arm unless she is feeble from age or ill-health, and needs the support. In the evening, a gentleman walking with a lady may offer her his arm. On no account should a man take a woman’s arm. This is a disrespectful freedom, that might be supposed to be the specialty of the rustic beau, if it were not so frequently observed in city thoroughfares.

As crowds are distracting, and people bent on their own errands are often oblivious of their surroundings, it is quite possible for a seeming cut to have been an unconscious oversight. When an acquaintance seems not to see one, though close at baud, it is possible that something closer yet to his consciousness is absorbing all his thoughts. Only clear and unmistakable evidence of intention should lead one to infer a slight. It is not only more polite, but more self-respecting, to “take offense” slowly.