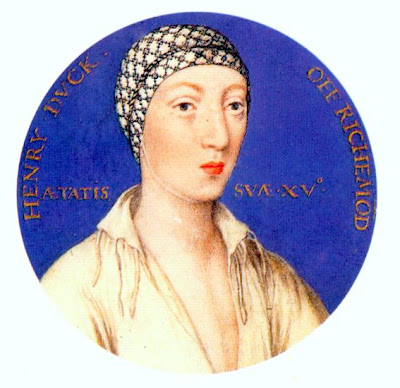 In July 1519, Henry VIII became the father of a bouncing baby boy. The problem? The mother wasn’t his wife, Queen Catherine of Aragon (who was, however, heavily pregnant at this time), but his mistress Bessie Blount.

Bessie Blount was one of Queen Catherine’s ladies. Once her pregnancy had become impossible to hide, she was forced to retire from court. She probably went to the Priory of St. Lawrence at Blackmore in Essex, where her son would be born. We don’t know the exact date of the birth, but historians have suggested that it occurred on the 15th. Elizabeth Norton, instead, believes the real date to be the 18th because on that day, Henry, who was expected at Hampton Court on the 19th, disappeared until the 29th. A few years later, 18 June was also the date chosen to bestow the title of Duke of Richmond on the child, and a royal grant on Bessie and her husband, Gilbert Tailboys.

The King and Cardinal Wolsey made sure that Bessie had everything she needed and was comfortable during her pregnancy, so it is likely that they also sent her a well-trained and experienced midwife. They probably also chose a wet-nurse, as was customary at the time. The baby would be baptized at the chapel at Blackmore a few days after the birth, with Cardinal Wolsey acting as godfather.

The King was over the moon when he was told Bessie had given birth to a boy, and visited them both several times. The baby was named Henry, like his father. He was also given the surname of Fitzroy, which means “son of the King”, and indicated his status as a royal bastard. Henry had decided, in fact, to recognize his son as his own and would bring him up accordingly. The baby was given his own establishment and, once grown up, his father would bestow titles, offices, riches and lands on him.

Despite his illegitimacy, Henry loved his son tenderly. The King must also have felt very relieved to realise that he could, after all, conceive a healthy baby boy. If so far, his marriage hadn’t been blessed with a living son and heir, it certainly wasn’t his fault. Catherine, on the other hand, must have been hurt by the birth. It mustn’t have been easy to come to terms with the fact that another woman had given her husband what he most wanted and needed: a son. And pretty soon, the King would start looking for a reason to annul their marriage…