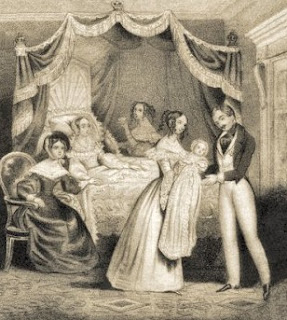 On 21st November 1840, “a dark, dull, windy, rainy day with smoking chimneys”, Queen Victoria gave birth to her first child, Princess Victoria. In her diary, the Queen claimed that she wasn’t nervous at the approaching birth at all: “Just before the early hours of the morning of the 21st I felt again very uncomfortable & with difficulty aroused Albert . . . Tried to get to sleep again, but by 4, I got very bad & both the Doctors arrived. My beloved Albert was so dear and kind. . . Locock said the Baby was on the way & everything was all right. We both expressed joy that the event was at hand & I did not feel at all nervous.”

With her were only her dearest Albert, who hardly left her side and held her hand, Charles Locock, her chief obstetrician, and a nurse-midwife. Sir James Clark, the Queen’s physician and two assisting doctors were in the antechamber, just in case they were needed. Everyone else, including the Prime Minister, the Foreign Minister and the Archbishop of Canterbury, eagerly listening for any new sound, were relegated in a room beyond. The Queen didn’t want anyone who couldn’t provide neither help nor support during her accouchement.

Finally, at around one fifty in the afternoon, the baby was born. Her sex was a disappointment to both her parents, who were, however, grateful to have a beautiful and healthy daughter. When she was told she had given birth to a girl, the tired Queen had said: “Never mind, the next will be a Prince.” Later, the new mother wrote: ” [A]las! A girl and not a boy, as we had so hoped & wished for. We were, I am afraid, sadly disappointed, but yet our hearts were full of gratitude, for God having brought me safely through my ordeal, & having such a strong healthy child.” The new father instead, wrote to his brother Ernest: “I should have preferred a boy, yet as it is, I thank Heaven”.

Although disappointed by her sex, both Victoria and Albert doted on their daughter and were very proud of her. Although the Queen didn’t personally take care of her (it wasn’t customary at the time, plus Victoria wasn’t particularly fond of babies), she loved to show off little Vicky to her ladies-in-waiting, ministers, and anyone else who visited the court.

The baby was baptised on 10 February 1841, the first anniversary of her parents’ marriage. Everyone was very impressed that she remained awake, and didn’t cry, throughout the ceremony. According to her father, this meant that she was “very intelligent and observing”. He was right.