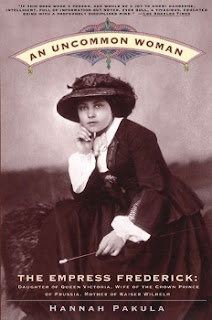 I bought An Uncommon Woman by Hannah Pakula because, after years of studying the life of Queen Victoria, I had became interested in her children as well. And what better way to start my research on them than a biography of her eldest child, Victoria? But this book turned out to be so much more than just a biography of Vicky, as she’s called in the book to distinguish her from her mother. An uncommon woman is also the biography of her husband Frederick, her son Wilhelm and German statesman Otto Von Bismark, as well as the history of the unification of Germany!

As you can imagine, this is a most interesting read, but by no means a light and easy one. It is very well-researched and extremely detailed (it is 600+ pages long!), packed with a plethora information about both the daily lives of its protagonists and the political influence they exercised. Vicky was only 17 when she married Frederick, the Crown Prince of Prussia, and had to leave her loving home to live in a hostile country. Although the couple was very much in love, the Prussian government was very autocratic and feared the liberal and democratic ideas the new Crown Princess shared with her husband. Because of this, Bismark did all he could to isolate the couple.

He would prevent Frederick from exercising any influence in the government of the country, deny him recognition for the fundamental part he played in the unification of Germany, and poison the minds of his father, Kaiser Wilhelm, and of his son and heir, the future Emperor Wilhelm II, against him. Frederick and Vicky patiently put up with this painful situation, believing they would readdress and put an end to all the problems of the country when they would ascend to the throne. Sadly for them, for their country and the rest of Europe, Frederick was terminally ill with cancer when he became Kaiser. He would rule for only 99 days.

His heir, Wilhelm was a spoiled and selfish brat. And not as pliable as Bismark has thought. Wilhelm had supported the statesman against his own parents because it was convenient for him to do so. But once in power, he wouldn’t hesitate to get rid of the chancellor if the latter refused to obey his wishes, even when these wishes had disastrous consequences for the country. After her husband’s death, Vicky lived her life in retirement, away from politics. This was very difficult for her. She was a very gifted woman who could see clearly what the militaristic and autocratic policies of the government would lead to, and yet could do nothing to stop them.

The book also emphasizes how many of the horrors of the first half of the 20th century had their origin in this period. Germany had become an united nation, not through democracy and liberality, but through war, lies and subterfuges; the country was ruled by autocrats; the climate was one of militarism and suspicion; and anti-antisemitism, often used as a political weapon, was spreading fast. This helped me better understand the environment and climate in which Nazism was born in and flourished years later. How very different history would have been if Frederick and Vicky had had a long reign!

Throughout all her woes and difficulties, Vicky maintained a close correspondence with her mother. She also kept loving her home country more than Germany. This is not surprising considering the way she was treated by the Prussians and Germans from the very first day of her arrival in her new country. Sadly, it is also not surprising that this love for Britain was often used by the government to put her in a bad light. Vicky, however, loved Germany and wanted the best for the country. She wanted Germany to adopt the same political system of the United Kingdom and for the two countries to be close, rightly believing this would benefit the nation she was briefly called to rule upon.

An Uncommon Woman is a very informative, but also overwhelming read. There is just so much information and chronological order isn’t always followed, so it is easy for the reader to get lots sometimes. The author draws extensively from Vicky’s letters and other primary sources of the time, never indulging in speculation, which was quite refreshing. So many authors these days make wild claims without having the evidence to back them up. Not here.

The writing style is also mostly engaging, but it can, at times, get a little dry. All in all, though, the book flows easily and is a page turner. I’d definitely recommend it to those who are both interested in the life of this fascinating woman (I doubt you’d find a more complete biography of Vicky) and the political time she lived in. If, however, you want a light read and are only curious to know more about Vicky, and not the history of Germany too (although the latter is a fundamental part of her story), then this is not the book for you.

Summary:
An Uncommon Woman by Hannah Pakula is a through biography of Vicky, the eldest child of Queen Victoria and Prince Albert, of her husband, Crown Prince Frederick of Prussia, her son, the future Emperor Wilhelm II, of statesman Otto von Bismark, and a detailed history of the unification of Germany. The book is extremely detailed, very well-researched and highly informative, but can, because of the magnitude of the subject, get a little dry and confusing at times.