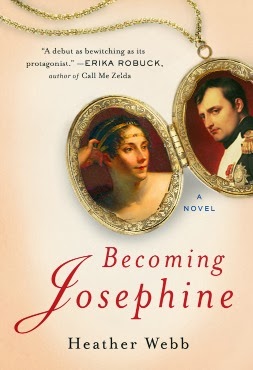 Synopsis:
A sweeping historical debut about the Creole socialite who transformed herself into an empress.
Readers are fascinated with the wives of famous men. In Becoming Josephine, debut novelist Heather Webb follows Rose Tascher as she sails from her Martinique plantation to Paris, eager to enjoy an elegant life at the royal court. Once there, however, Rose’s aristocratic soldier-husband dashes her dreams by abandoning her amid the tumult of the French Revolution. After narrowly escaping death, Rose reinvents herself as Josephine, a beautiful socialite wooed by an awkward suitor—Napoleon Bonaparte.

In her debut novel, Becoming Josephine, Heather Webb chronicles the life of Martinique-born Marie-Josephe-Rose de Tascher de La Pagerie de Beauharnias, the events that have shaped her life, and the “joys, pains, deeds and failings” that transformed her into the empress Josephine, Napoleon’s first wife. Josephine was a survivor. She lived in tumultuous times and was forced to start anew and reinvent herself over and over again to make her way in the world.

At 16, Josephine, or Rose, as she was then called, left Martinique for France, where she married the aristocrat Alexander de Beauharnais. But her romantic illusions were soon shattered. Alexander turned out to be an unfaithful, inattentive and even cruel husband who constantly left Rose alone to purse his own pleasure. Tired and humiliated, Rose separated from him and used her wits and connections to support herself and their two children. Then, the Revolution broke out. Rose tried to keep her opinions to herself not to attract the attentions of the revolutionaries, but when her patriotic husband is arrested, she is sent to jail too.

Prisoners were kept in appalling conditions, and Rose came close to death. The fall of Robespierre saved her just in time. Now free, Rose longed for security, both for herself and her children and, much like Scarlett O’Hara, of whom Josephine often reminded me, she was willing to do whatever it was necessary to achieve it. At 31, though, her charms were beginning to fade. It’s then that she met an awkward, arrogant and intense general, Napoleon Bonaparte. Little did she knew when she agreed to his marriage proposal that they would rule France together.

Because the book covers 30 years, Webb had to omit or take liberties with some of the events in Josephine’s life. There are times when the book moves a bit too fast, and you’ll be left wanting to know more about certain issues or episodes. However, Webb had a very good reason to do this. It allowed her to concentrate on those facts that better serve to illustrate how Josephine grows and changes. And that’s what the novel is about. It’s not a love story or simply the chronicle of the life of one of the most intriguing women in history. It’s a story of self-discovery, of the journey a woman went through to find her true self.

Josephine doesn’t transform from a romantic, flighty and pleasant-loving young teenager into a devoted mother and a generous, politically-savvy empress overnight. No, it happens gradually, as she realizes her own strengths and her own failings. But it’s only when Bonaparte divorces her that Josephine’s metamorphosis is complete. Only then she is able to be truly herself, the mistress of her own destiny.

Webb dis a great job at bringing the captivating and lively Josephine to life. You will root for her as she tries to realise her dreams, ache for her when she is used and betrayed by men, and be inspired by her determination to survive. The author also beautifully and vividly described the world Josephine lived in, giving the reader the impression they are just right there beside her too.

The writing style is entertaining and accessible. A bit too modern, maybe, but it works. The book is a pleasure to read, moves at a good pace, and is detailed enough to bring the characters and their world alive without bogging it down. Overall, I highly recommend it to all fans of this historical period and to those who wants to know more about Josephine.

Summary:
Written in the first person narrative, Becoming Josephine is a story of self-discovering. Chronicling her life from her humble beginnings to her divorce to Napoleon, Webb shows us how events, and the way she reacted to them, have shaped Josephine. Although the book is not always accurate, and the writing style a bit too modern, the characters are well-drawn and captivating, and, together with their world, really come alive. The story moves at a great pace and is just a pleasure to read. Highly recommended.