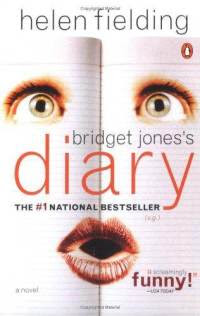 Synopsis:
“130 lbs. (how is it possible to put on 4 pounds overnight? Could flesh have somehow solidified becoming denser and heavier (repulsive, horrifying notion)); alcohol units 2 (excellent) cigarettes 21 (poor but will give up totally tomorrow); number of correct lottery numbers 2 (better, but nevertheless useless)…”
This laugh-out-loud chronicle charts a year in the life of Bridget Jones, a single girl on a permanent, doomed quest for self-improvement–in which she resolves to: visit the gym three times a week not merely to buy a sandwich, form a functional relationship with a responsible adult, and not fall for any of the following: misogynists, megalomaniacs, adulterers, workaholics, chauvinists or perverts. And learn to program the VCR.
Caught between her Singleton friends, who are all convinced they will end up dying alone and found three weeks later half-eaten by an Alsatian, and the Smug Marrieds, whose dinner parties offer ever-new opportunities for humiliation, Bridget struggles to keep her life on an even keel (or at least afloat). Through it all, she will have her readers helpless with laughter and shouting, “BRIDGET JONES IS ME!”

ALERT: The following review contains spoilers. If you don’t want to know how the book ends, stop reading now (yes, that includes the summary too).

I’m not a big fan of chick-lit books (although these books are a nice, light read for when you travel as you don’t really have to concentrate), but Bridget’s Jones Diary by Helen Fielding is described as a defining books of this genre, which led me to believe it would be better than the rest. Boy, was I wrong! Yes, there are a couple of fun lines and the book is a quick read, but there is nothing else I like about it. It’s not entertaining, it’s not that funny and Bridget Jones is one of the most irritating and annoying characters I’ve ever come across!

Bridget Jones is a thirty-something year old woman who keeps a diary where she writes her hopes and dreams, thoughts and experiences, but also notes (in every entry!!) how much she weighs, how many cigarettes she smokes, how much alcohol she drinks and the number of lottery tickets she buys. Although she is by no means fat, she is obsessed about her appearance and losing weight, and is desperately seeking a man. In a nutshell, Bridget is a woman with serious self-esteem issues and probably an eating disorder too.

Normally I would feel sorry for someone like that but it was impossible for me to have any sympathy for her. Why? Because she does absolutely nothing to change and despite that, Mr Darcy, a good-looking, smart, sweet guy, still falls in love with her! How?! They met only a handful of times, and every time Bridget has managed to make a fool of herself and show what a superficial, shallow, vain and desperate for a man she is. I kept expecting a transformation from a superficial girl to a strong, smart woman like it happened to Elle Woods in Legally Blonde (a movie I love, by the way), who, after going to Harvard, realises that there are more important things in life than looks and men and by working hard, she becomes clever and successful while still retaining her love for pink and girly stuff (because a woman can be both pretty and smart). Bridget, instead, doesn’t even attempt to improve herself, yet she gets the man she wants in the end.

The other characters aren’t that much better. Just over-the top caricatures, while the storyline involving her mother and Julio is simply unbelievable. But that’s not the only things that’s unrealistic: the diary format is too. What woman would write every little mishaps that happens to her in her diary while she’s getting ready to go out and is already late or is cooking? If she had written these things down at the end of the night/meal, it would have been more credible.

Summary:
Bridget’s Jones Diary by Helen Fielding is a light but meaningless read. The protagonist is an annoying girl with no self-confidence, who obsesses about her appearance and is desperate to find a boyfriend and for some reason, manages to get the man she wants without even attempting to improve herself. The other characters are just caricatures and the storyline involving her mother just isn’t credible. I’m sure fans of chick-lit books will enjoy it anyway but I really couldn’t get into it and instead than having me in stitches, this book left me feeling annoyed and frustrated.

Available at: Amazon.com and Barnes & Nobles