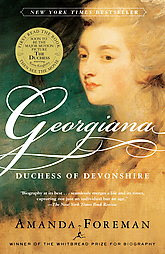 Lady Georgiana Cavendish, nee Spencer, is a very fascinating historical figure. She was so charming and privileged yet her life was tragic, even more so because most of her problems were brought on by herself and thus, avoidable. But who was Georgiana? She was born in a rich and influential family and received a good education for her time. She went through some traumas in her childhood (some of her siblings died, her parents left her with her grandmother and travelled abroad alone), but these were quite common occurrences at the time. More unusual, she came from a loving family. Her parents loved each other and their children very much.

Georgiana married William, Duke of Devonshire and become one of the most popular figures of her time, a fashion icon and the Queen of the Ton. She was also very active in politics. Women could not vote at the time, but this didn’t mean that they didn’t have any power at all. Georgiana understood the importance of public relations and used her money, popularity and charm to advance the cause of the Whig party. But her marriage was unhappy. It seems that everyone was in love with Georgiana, except her husband, who didn’t pay much attention to his wife and only expected two things from her: a heir and not gambling his fortune away. For a long time, it seemed like Georgiana couldn’t do either.

To console herself, she started partying, drinking, spending huge amounts of money on clothes and gambling, accumulating huge debts which forced her to ask loans from her friends (which she couldn’t return) because she was too scared to confess the truth to her husband. She had several miscarriages but eventually gave birth to three children: first two daughter and then the long-awaited heir. Her self-esteem was so low, and the need for love and acceptance so big that she became totally dependent on her friend Elizabeth Foster, who lived with her. She wouldn’t break off their friendship even after she became her husband’s mistress.

The book is extremely well-research and really brings to life the times and society Georgiana lived in, with its obsession for appearances, the rivals and intrigues, the cheating and gambling. Yet, the book is written in a straightforward style that is very easy to follow and understand. The only “dry” parts are those that focus on the political situation of the era, which Foreman describes in great detail (politics was a big part of Georgiana’s life after all). I actually enjoyed those but if you don’t care about politics, you may find these parts boring. Foreman also portrayed the Duchess in a honest and objective way, showing both her good qualities and her faults and allowing the readers to draw their own conclusions. Overall, this is a great read for both the scholar and the casual reader.

Summary:
Georgiana, Duchess of Devonshire by Amanda Foreman is a wonderful read both for scholars and casual readers. Foreman draws a honest portrait of Georgiana showing her good qualities and her faults, her charms and lack of self-esteem that made her life so unnecessarily tragic. The book is well-research with lots of information on the politics and the society of the time, which is presented in a straightforward, easy-to-follow way.