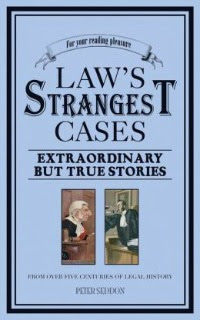 Synopsis:
Full of riotous and entertaining stories, this book is perfect for anyone who is doing time on a long stretch. It covers the only dead parrot ever to give evidence in a court of law; one of the most indigestible dilemmas (If you’d been shipwrecked 2,000 miles from home, would you have eaten Parker the cabin boy?); the doctor with the worst bedside manner of all time; and the murderess who collected money from her mummified victim for 21 years. Readers will be gripped by these tales of murder, intrigue, crime, punishment and the pursuit of justice, tales that are in turn bizarre, macabre, and sometimes hilarious.

Reality is really stranger than fiction. That’s something you’ll often hear yourself say while reading Peter Seddon’s Law’s Strangest Cases, a short book about the most unusual cases in legal history. Some of the occurrences are so weird that, had you read them in a detective story, you would’ve shaken your head, bemoaning the lack of creativity of the author and wondering whether he or she thought readers were silly to believe things like that could ever happen. Yet happen they did. For real.

The book begins with the case of Jesus Christ and ends with that of two conjoined twin sisters, in which the judge was called to decide whether the operation that would separate them, and certainly kill one of them, could be performed. In the middle, there are all sorts of weird cases… dead parrots that give evidence in court, moles prosecuted for ruining crops, judges that preside trials from hospital beds, a man that gives evidence to the inquest for his own death, a murderess who collected money from her mummified victim for 21 years, jurors that refuse to do their duty unless they’re paid for it…

Although law is supposed to be serious, and several of the cases mentioned are quite macabre, Seddon use an ironic, funny tone that will make you frequently laugh, even when it is not appropriate to do so. You just won’t be able to help it. However, if you’re not British, I suggest you keep a dictionary close (or better, read it on your Kindle), because Seddon often uses British slang. Most of the cases discussed in the book also occurred in Britain, although there are some from the USA, China, Italy, Australia and a bunch of other countries.

But my main gripe with the book is how brief is the space dedicated to each case. Only 4 or 5 pages at most. While this keeps the book fast-paced and entertaining (after all, who would want to read endless pages discussing trial proceedings in details?), it also means that if you aren’t familiar with the cases (and most people aren’t as the first half of the book relates trials that took place in past centuries, while most of the modern ones occurred in Britain), it’s very difficult to relate to them or care much about the people involved. Giving readers more facts and a better idea of what happened during the trials, without discussing them in minute details, would have made the book more interesting.

Summary:
In Law’s Strangest Cases, Peter Seddon shares the weirdest legal cases (mostly from Britain) that occurred throughout the centuries. The book discusses each case in a funny and ironic way that will make you laugh a lot. However, the author often uses British slang that can be difficult to understand for those who aren’t familiar with it, and, due to the limited space allotted to each trial, the reader only gets a vague idea of what happened.