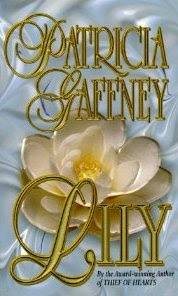 Synopsis:
A beautiful British lady is forced by circumstance to become the maid of a handsome and brooding gentleman in this historical romance from the author of “Sweet Treason” and “Fortune’s Lady”.

In pretty much any book, the heroine has to face and overcome some trials and tribulations, but rarely as many as Lily. Bad luck seems to follow her everywhere, which after a while can be really frustrating to read. But let’s start from the beginning. When her father dies, Lily’s uncle tries to force her to marry his son. When she refuses, he threatens to accuse her of theft. A row ensues in which Lily knocks her uncle out. Thinking she’s killed him, she panics and flees, with barely no money and no clothes. She finds a job as a scullery maid in a big Devonshire mansion. The work is hard, the hours long, the pay very low and, to make matters worse, the housekeeper is an evil woman who severely punishes the servants even for the most insignificant and minor faults or mistakes. At times, she beats them up too.

One night, Devon, the master of the house and hero of the story, sees her emerging naked from a lake and decides to seduce her. But she doesn’t want to be just another notch on his bedpost. Devon can’t understand her refusal. To him, she’s just a servant and so, to no avail, he persists. Then, Devon gets wounded while helping his smuggler brother escape justice and Lily takes care of him until he gets well again. No one must know that Devon is wounded, let alone why and so noone understands why the master won’t let anyone else near him. Soon, the servants become convinced that they are lovers and start treating her differently, whispering and making fun of her behind her back. But nothing has happened between Lily and Devon yet. They are falling in love, but Lily still refuses to become his mistress.

And then, the evil housekeeper accuses Lily of stealing. Devon doesn’t believe in her innocence. Devon’s wife had run away with another man, taking their only son with her only for them to become ill and die soon afterwards. From then on, he has stopped trusting women. Things change when the housekeeper, emboldened by the fact that Devon has believed her lie, beats Lily up very badly. He kicks the housekeeper out and, once Lily is well, the two become lovers. Then one night, Clay, Devon’s smuggler brother, get shot in the head. Near his body, a small piece of paper where Lily is accused of the crime is found. Lily, after facing Devon’s fury, leaves. You’d think we’re almost at the end of the book, but we’re only halfway through and there are lots of things that I left out.

Basically, Lily is a lovely but very unlucky girl. Bads things keep happening to her over and over again. When things seem at their worst, they get even worse. At first, it makes for an exciting and engrossing read but, after a while it just starts to get annoying. I personally feel that the plot is just too long and lots of elements and secondary stories should have just been kept out of it. They don’t add anything to the book but just drag it along. Devon, on the other hand, is not your typical hero. He actually behaves like a total jerk to Lily for most of the book but she just keeps forgiving him everything. I understand the experience with his first wife left deep scars in him, but that’s no reason to treat people so badly. In the end, though, Lily finally sticks up for herself and Devon starts behaving properly. Overall, it’s a nice story, just wayyyyy too long.

Summary:
Lily by Patricia Gaffney is a well-written book full of twists, turns and subplots. While all this makes for an engrossing read at the start, as the book progresses they become repetitive and far-fetched. All kinds of bad things seem to befall Lily all the time, which both makes the reader feel sorry for her but also annoyed. As for Devon, he’s not a bad person, but he does behave really badly most of the time so the reader can’t really root for him.

Available at: Amazon US, Amazon UK and Barnes & Noble