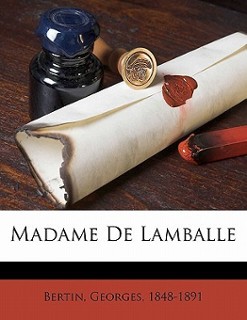 The Princess De Lamballe, a close friend of Marie Antoinette, was one of the most famous victims of the French Revolution. Because of it, I’ve always found it odd that there aren’t many biographies written about this tragic and fascinating figure. So, when I’ve found “Madame De Lamballe” by Georges Bertin, which is available for free online, I’ve eagerly download and devoured it.

What an interesting read it was! Born Maria Luisa of Savoy, she was married at a very young age to Louis Alexandre de Bourbon, Prince de Lamballe, the heir to the greatest fortune in France, but soon became a widow. The Princess, who never remarried, remained in France, where she met and became close friends with the young Dauphine, and later Queen, Marie Antoinette. The Queen would eventually become even closer to the Duchess De Polignac, but yet the two women remained good friends.

And when the Queen needed her, Madame De Lamballe was always there. She remained loyal to Marie Antoinette till the very end. When the French Revolution broke out she was sent to prison and during the September massacres, after refusing to “swear hatred to the King and the Queen and to the monarchy”, she was brutally murdered. Her head was then cut off and carried on a spike all the way to the Temple so the Queen could see it.

To tell her story, her relationship with her family and the Queen, Bertin uses mostly unpublished documents and articles taken from the newspapers of the day. The biography is thus full of interesting but little-known anecdotes about the Princess. However, the portrayal of the Princess that comes out of the book is not unbiased. Bertin justly stresses that Madame De Lamballe wasn’t the frivolous beauty many think she was, but was intelligent, well-educated, “enlightened”, devoted to those she loved and did many charitable deeds.

But the author is a bit too enamoured with the Princess to fairly portray her faults. He seems to blame the Princess’ loss of favour with the Queen mostly, but not solely, on the Duchess the Polignac, who apparently schemed to destroy her rival. He also often complains about the Duchess using her influence to obtain privileges, titles and money for her family and friends. While it is true that the Polignacs benefited greatly from Gabrielle’s friendship with the Queen, Madame De Lamballe often asked favours of Marie Antoinette as well, which however weren’t always granted.

Bertin says that all these requests were another of the reasons why Marie Antoinette grew tired of the Princess but if so, shouldn’t the Queen have grown tired of the Duchess De Polignac as well? In my opinion, the author is trying too hard to justify Marie Antoinette’s preference for the Duchess over the Princess. The reason is probably much more simple. We all get along with and like some people better than others and I think Marie Antoinette simply found herself more at ease with the frivolous Gabrielle than the intellectual Lamballe.

Despite these minor flaws, the biography is still a fascinating read. It was written in 1901 so the style is somewhat archaic and convoluted but by no means difficult to follow. On the contrary, it flows easily and is very engaging and captivating. I would definitely recommend this book to anyone who wants to find out more about this tragic princess.

Summary:
Madame De Lamballe by Georges Bertin is a must read for everyone interested in this tragic historical figure. Engaging and captivating, the biography, which uses mostly primary sources, is full of fascinating and little-known tidbits about the Princess. However, the author is a bit too biased towards his subject and the style is somewhat archaic.