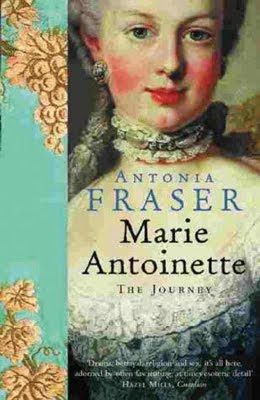 Marie Antoinette is one of the most famous but misunderstood women in history. She’s been accused of being a selfish, foolish and promiscuous queen who only thought about partying, fashion, sex and squandering money while the people of France were starving. But is that really true? Or was she just an undereducated young girl who had to grow up under the limelight, a devoted mother and simply a woman who was trying to do the best she could in an impossible situation? Marie Antoinette: The Journey follows the life journey – and what a journey it was! – of this unfortunate Queen to discover who she really was.

The Journey began in Vienna, where Marie Antoinette was just the youngest daughter of the Empress Marie Therese. Her childhood was happy and idyllic but growing up in a big family meant she was also at time neglected and her education in particular suffered because of it. At a very young age, she left her country to go to France and marry the Dauphin Louis. We follow her transformation from an immature party girl who squanders money on clothes and gambling while failing to give France a heir (it would take the couple 8 years to consummate their marriage) to a devoted wife and mother, to a hated queen, humiliated, imprisoned and killed. Her journey ends on the scaffold.

Fraser is very sympathetic towards this unfortunate queen but the portrayal of Marie Antoinette that comes out of this book is neither that of a heroin nor a villain. She is described as a person, a woman, a wife and a mother. Like everyone else, she had faults: for example we learn how she loved gambling during the first years of her marriage and spent way too much on clothing and other expenses (although not more than any other member of the royal family). But she also had some good qualities. She was a compassionate, kind woman whose numerous charity activities and deeds are explored in the book.

However, this biography isn’t without faults. There are lots of vicious rumours circulating about Marie Antoinette even today and while Fraser does a great job at setting the record straight on most of them (she never said “let them eat cake” for instance) she herself seems to believe at least one: her affair with count Fersen. Fraser clearly states in the book that there are absolutely no proofs the Queen had an affair with Fersen, yet she still insists that it happened. She claims that Fersen was very reserved hence why no proofs of the affair survives (although this doesn’t take into any consideration that the Queen had no privacy at all and it would have been impossible to keep such an affair secret), and that the two must have had sex simply because it is human nature to give in to passion.

I beg to differ. Even assuming that Marie Antoinette was in love with Fersen (and only she knows what was in her heart), not everyone will yield to passion. Some people are able to resist temptation and Marie Antoinette was a prudish, modest woman devoted to her family and with high moral standards. Not to mention the fear of putting an illegitimate son on the throne of France may alone have been enough to prevent the Queen from being unfaithful to her husband. I understand why Fraser hopes the affair did happen. Marie Antoinette had few happy moments in her life that being able to be in a relationship with a man she loved would have made her happier, at least for a while.

However, I think this way of thinking is typical of our society and our century. We think of the affair as romantic and sex as something that cures all our problems, but for Marie Antoinette to sleep with Fersen would have been not only out of her character but also very dangerous. I would have enjoyed the book a lot more if Fraser had kept her opinions to herself. I don’t mind historians sharing their theories and their opinions on what happened, but these have to be based on solid scholarship, research and proof, not on what the author hopes has happened.

Still, the book is a very enjoyable read and well describes the world Marie Antoinette lived in. We find out lots of interesting tidibits about the Queen such as what she ate, what clothes and makeup she wore, the strict etiquette rules that regulated Versailles… French history, politics and the Revolution are also well and clearly described in this book. But despite the wealth of information and details packed into this biography, it is never boring or dull. Fraser’s style is captivating and the book a page turner. I just couldn’t put it down!

Summary:
Overall, I really enjoyed Marie Antoinette: The Journey by Antonia Fraser. This well-written biography of the Queen follows her transformation from a young and immature girl unprepared for life at the French court into a devoted mother and wife and, finally, a hated Queen. Packed with details about life at Versailles and French politics, Fraser paints the portrait of a woman with both qualities and faults and sets the record straight on rumours still spread today about the Queen bar one. Stating the Fersen affair as fact even though Fraser herself has to admit in the book there aren’t any proof that it ever happened, cheapened the biography somewhat. But all in all, it is a very informative, insightful and eye-opening book about a very misunderstood queen.