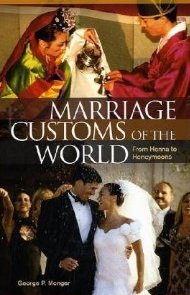 If you are interested in marriage traditions, past and present, of the world, then you need to check out Marriage Customs Of The World by folklorist George Peter Monger. The book is an encyclopedia containing more than 200 entries, arranged in alphabetical order, on anything related to marriage. Thus, we begin with abduction (bride theft) and end with Zulu weddings. At the end of each entry, we find a selection of the sources that were consulted to write it. This replaces a full bibliography at the end of the book.

Although modern practices such as same-sex marriage and common law marriage are also included, the book covers mainly old traditions that usually don’t date further back than the 18th century. The entries refer to a multitude of topics related to marriage such as courtship and arranged marriages, pre and post wedding rituals, how this ceremony is celebrated in several parts of the world (although most Western countries, such as the USA and Italy, aren’t included and when they are their rituals are often outdated), and the symbols attached to them such as rice, rings and bouquet. It also explains how some of these customs have evolved throughout the ages.

As you read the book you discover that ideas and symbols related to marriage are very similar throughout the world, but of course the rituals attached to it are quite different as they reflect the culture they are practised in. It also sets the record straight on a few myths, remembering us that white dresses are a recent phenomenon and church weddings weren’t practised before the 16th century. The book is very insightful, informative and authoritative but also very expensive (as encyclopedias and dictionaries usually are). The book retails at about $80!, but can be found on sites such as Amazon and Abebooks for half that price. It’s still a pricey investment so, unless you’re really passionate about this subject, I’d recommend you check if your library has it. If you end up loving it, you can always buy it later.

Summary:
Marriage Customs Of The World by George Peter Monger is an encyclopedia about marriage rituals and ceremonies. Most of the entries don’t date further back than the eighteen century, with only a bunch of them being about modern customs. Still, the book is an informative and insightful, although very expensive, read for all those interested in marriage customs and their history and evolution.