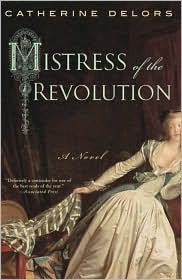 Synopsis:
An impoverished noblewoman, Gabrielle de Montserrat is only fifteen when she meets her first love, a commoner named Pierre-Andrè Coffinhal. But her brother forbids their union, forcing her instead to marry an ageing, wealthy cousin. Widowed and a mother before the age of twenty, Gabrielle arrives at the court of Louis XVI and Marie Antoinette in time to be swept up in the emerging turbulence and to encounter the man she never expected to see again. Determined and independent, she strives to find her own freedom as the Revolution takes an ever more violent turn.

This is one of the most difficult reviews that I’ve ever written. Why? Because Mistress Of The Revolution by Catherine Delors is one of my favourite books ever and, even though I did my best, I’m not sure I managed to do it justice. Mistress Of The Revolution is a very captivating book that you just can’t put down so prepare to spend a few sleepless nights while you hasten to reach the last page! The book is written in the format of a memoirs. In it, Gabrielle, a beautiful minor noblewoman from Auvergne now living in England recalls her childhood, youth and the French Revolution that dramatically changed her life and those of millions of other people.

As a teenager, Gabrielle falls in love with a commoner, Pierre-André Coffinhal. The two want to get married but Gabrielle’s family won’t hear of it and force to her to wed an old and abusive Baron instead. As a result, Pierre-André leaves for Paris with an implacable hatred for the Old Regime and all aristocrats. As for Gabrielle, her marriage is short-lived as her husband dies soon afterwards, leaving her with a daughter and very little money. She then decides to seek her fortune in Paris where she will have to make difficult choices and accept compromises in order to support herself and her little girl while striving for independence and freedom.

While at first the book is slow, but by no means ever boring, the pace quickens when the Revolution breaks out and it becomes a real-page turner. Because of the memoir format of the book, most events are only briefly described as Gabrielle herself wasn’t there to witness them. But other times she was caught in the middle of the storm. She’s there when the mob storms the Tuillieris and is again present at the prison massacres that occurred in September 1792 for example. At this point, being an aristocrat in France has become really dangerous and to avoid the guillotine, Gabrielle is forced to seek out the help of her former lover Pierre-André, who has become a judge of the Revolutionary Tribunal. Their love was genuine, passionate and sweet but he holds a grudge against her. What will happen when they meet again?

Not only is the story enthralling but Delors also describes the settings of the novel with such a richness of details that the reader feels like he/she is there with Gabrielle, following her around Paris and the French countryside. Also rich is the language used by the characters of the book. In the 18th century, conversations were a form of art, a way to exercise and sharpen the mind and bring pleasure to yourself and others. And that’s exactly what it did for me, I felt great pleasure in reading the skilled and elaborate conversations among the characters and it’s all the more astounding since English isn’t Delor’s mother tongue.

But it’s not only the story, the characters and the settings I enjoyed. I also learned a great deal about the French Revolution, whose rapidly turns are briefly but well-described in this book and gives the reader a better understanding of this tragic historical period. Like many other nobles of the time, Gabrielle greets the Revolution with excitement, as she sees it as a way to positively change society and improve people’s lives, which later turns to fear and apprehension as the Terror begins.

Gabrielle is a fictional character but lots of historical figures make an appearance in the book, from the Chevalier De Huttes, a devotee of Marie Antoinette, to the Duc De Lauzun who becomes friends with our heroine to Robespierre whom Gabrielle briefly meets. King Louis XVI and Queen Marie-Antoinette also make brief appearances in the book and they are portrayed through the point of view of the people, making it easy to understand why they were so misunderstood and hated.

Summary:
Mistress of the Revolution is a book that I highly recommend. It tells the story of Gabrielle, an impoverished noblewoman who tries to survive in a changing, hostile world and whose life will be tragically affected by the French Revolution. Delor’s style of writing is captivating and enthralling, the world she evokes vibrant and realistic, and the story full of romance, drama, love, tragedy, passion and history that, at times, will make you cry your eyes out. It is also very historically accurate and full of details of what life was like at the time. The fact that this is Delor’s first work and, especially, that is written in her second language, blows my mind even more. A definite must-read.