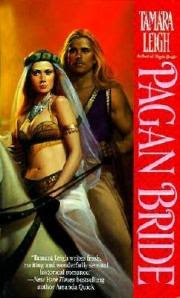 Synopsis:
Pledging to smuggle a virtuous young woman from a harem in exchange for his freedom, slave Lucien de Gautier is unprepared for the greater challenge that is presented by the red-haired beauty who captures his heart.

In the harem:
Alexandra: can we have sex, Lucien?
Lucien: no, we can’t. Everyone thinks I’m an eunuch. If they find out the truth, they will castrate me, or worse…
Alexandra: who cares? I wanna have sex! I wanna have sex! Please, Lucien, please!
Lucien: fine, but we can’t go all the way.

I have a love/hate relationship with historical romances. When they’re good, they are a light read for when you travel and they transport you to a world where you know that, no matter what happens, everything’s gonna end well, which feels nice. But when they’re bad, they’re really bad: they aren’t historically accurate at all, have too far-fetched plots and are overly sexual. Pagan Bride by Tamara Leigh was one of those books and one of the worst I have ever read in my life. The story is very cliche. Sabine was kidnapped from home when pregnant and ended up in a harem. Years later, when she’s seriously ill, she buys a slave, Lucien, promising him freedom if he takes her daughter Alexandra back to her father in England. Of course Alexandra and Lucien are very attracted to each other but nevertheless Lucien accomplishes his mission.

Only to find out they belong to two families who hate each other. Back home, they will have to deal with this hatred, Alexandra’s evil stepmother and a priest who considers this young woman a heretic and wants to see her punished for it. Oh, and Alexandra’s betrothed coming all the way to England to get her back. Unfortunately, though, these issues aren’t explored in depth and they just seem like they were included to make the book longer. For instance, apart from staring at Alexandra in a menacing way and raising his voice once, the priest doesn’t do anything else. I was expecting him to create real trouble for Alexandra but he didn’t. He’s just a completely useless character that doesn’t add anything to the story.

Alexandra herself is a very annoying character. All she does throughout the book is get herself into trouble because she refuses to listen to good advice from people who know better and she’s demanding sex all the time from Lucien. Now, I know that when you are in love it’s only natural to want to make love, and that living in a harem made her pretty curious about sex, but this woman is gagging for it all the time! She doesn’t think about anything else! She doesn’t care what the consequences will be for her or for the man she loves, she just wants to have sex and keep reminding us all from the beginning of the book till the very end!

The historical details aren’t very accurate either but I never expect them to be in historical romances (although I always hope they are cos that’s one of the main things that distinguishes a good historical romance from a bad one). Tamara Leigh herself knew her stories were lacking and she was worried her writing wasn’t honouring God as it should (it definitely wasn’t), so she has now made the transition from historical romance author to Christian fiction author. I haven’t read these later novels yet but I’m really curious to. I’m sure that, because she now writes about something she’s passionate about, the stories and characters will be better developed in her new books.

Summary:
Pagan Bride by Tamara Leigh is one of the worst historical romances I have ever read. Not only are the historical details lacking, but the plot is very predictable and cliche too. The obstacles thrown in the way of the main characters seem just excuses to make the book last longer and spice up a very uninteresting story. I also find the protagonist, Alexandra, a very annoying character: a spoiled girl who gets in trouble for not listening to reason and so obsessed about sex to beg for it in practically every page of the book.