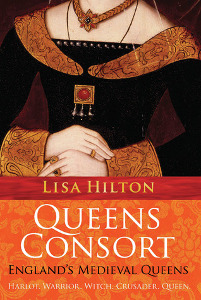 With few exceptions, such as the formidable Eleanor of Aquitaine and the She-Wolf Isabella of France, Medieval Queens have been relegated to footnotes in history books. But those whose names and deeds have survived the centuries haven’t fared much better. Their reputations have been shaped by hostile writers who used their stories to demonstrate why women should never rule over men, but always be subordinate to them. Their job was to take care of their husbands and children, not meddle in politics.

Queens Consort by Lisa Hilton tells the stories of all medieval English Queens, from Matilda of Flanders, the wife of William The Conqueror, to Elizabeth of York, who married Henry VII, and examines how the role, duties and influence of queenship changed throughout the centuries. I was very surprised to find out that Norman Queens had a lot more power and freedom than Tudor ones. The first Medieval Queens had the right to own property, grant lands, settle disputes and sue and be sued. Overtime, their role started to become more and more symbolic. For instance, by interceding with the King to spare the lives of men he had condemned to death, the Queen allowed him to revoke a decision he regretted without losing face. Instead, he, like his Queen, was praised for his mercy and clemency. By Tudor times, Queens were expected to just provide the kingdom with a heir and a spare, and were only rarely involved in the affairs of the realm.

Hilton portrays all the Queens, most of whom were young foreign princesses who had to adapt to a new life and a new role, in a fair way. She often emphasizes the double standards they were judged with by their contemporaries (characteristics that were considered desirable in a man such as strength, both physical and of character, were considered dangerous in a woman for instance). Despite this, she doesn’t idolize them nor does always justify their behaviour. She portrays them as the women they were, praising their virtues and good deeds, and criticising their flaws and most ruthless acts.

However, there are two main problems with this book. First, the editing. It was very rushed and there are glaring mistakes both in the genealogical charts and text that even those who aren’t very acquainted with this history period can quickly spot. The second is the writing style. It is very flat and dry. Besides, at times I felt like the lives of these Queens were just used as a pretext to talk about the history of England in Medieval times. It is true that there is a wealth of information on all the Queens, which I really enjoyed, but there is a lot more on their husbands and children.

Most of the book actually focuses on English politics, which although fundamental to understand the time, culture and society these women lived in, are narrated in such a rushed, often convoluted way, that’s quite hard to follow. I had to reread quite a few paragraphs a couple of times to understand them properly (something the many mistakes didn’t make easier), which really spoiled the book for me. Don’t get me wrong, I did enjoy it. It is a fascinating study on Medieval queenship in England, but it needs to be read in small doses, and only those who are really interested in the subject matter will make it to the end, which is really a shame.

Summary:
Queens Consort by Lisa Hilton is a fascinating study on medieval queenship and how the role, its duties and the level of power it afforded changed throughout the centuries. Hilton portrays all the Queens fairly, dedicating to each of them the space they deserve. However, the politics of the time, which take up most of the book, are discussed in a brief but convoluted way that’s hard to understand. The writing style is quite dry and there are lots of errors in the book. Because of this, I recommend it only to those who are very interested in this subject. It’s definitely not a book for history novices.