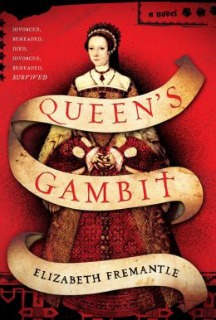 Synopsis:
Widowed for the second time at age thirty-one Katherine Parr falls deeply for the dashing courtier Thomas Seymour and hopes at last to marry for love. However, obliged to return to court, she attracts the attentions of the ailing, egotistical, and dangerously powerful Henry VIII, who dispatches his love rival, Seymour, to the Continent. No one is in a position to refuse a royal proposal so, haunted by the fates of his previous wives—two executions, two annulments, one death in childbirth—Katherine must wed Henry and become his sixth queen.

Katherine has to employ all her instincts to navigate the treachery of the court, drawing a tight circle of women around her, including her stepdaughter, Meg, traumatized by events from their past that are shrouded in secrecy, and their loyal servant Dot, who knows and sees more than she understands. With the Catholic faction on the rise once more, reformers being burned for heresy, and those close to the king vying for position, Katherine’s survival seems unlikely. Yet as she treads the razor’s edge of court intrigue, she never quite gives up on love.

We’ve been inundated with Tudors novels lately, haven’t we? I can’t blame anyone who feels like they need a break from them. But, please, if you must, take one only after you’ve read Queen’s Gambit, Elizabeth Freemantle’s first, and excellent, effort at historical fiction. Beautifully written and (mostly) historically accurate, Queen’s Gambit tells the story of Katherine Parr, Henry VIII’s last queen.

When her second husband dies, Katherine Parr, who would rather live out a quiet existence in the country, is briefly summoned to court. Here, despite her better judgment, she falls in love with the dashing Thomas Seymour and hopes to marry him. But the King has other plans for her. The old, fat and ailing Henry VIII, still smarting after the betrayal of his fifth young wife, Catherine Howard, is looking for an older wife with good nursing skills. Katherine perfectly fits the bill.

Katherine can’t refuse to marry the King. While her brother is ecstatic at the prospect of wealth and advancement for the Parr family, Katherine realises she will have to pay a high price for it. She won’t just have to set her feelings for Seymour aside, but she’ll enter a world of power and intrigues where losing means death. Katherine is not ambitious, but smart, canny and interested in religion. A fervent religious reformer, she hopes to influence her husband, who is slowly reverting back to Catholicism, to continue his work to reform the English Church.

Although Katherine is good at manipulating Henry, her outspoken behaviour and protestant leanings attract her the enmity of the Catholic faction, then on the rise at court, and almost have her arrested as an heretic. Freemantle does a great job at depicting the atmosphere of fear Katherine, and the rest of the court, constantly lived in, knowing that their lives depended on the whim of a king who was becoming more irrational and paranoid as his health worsened.

Fremantle also makes the court, with its smells, its sights, its intrigues hidden behind its magnificence, come alive. The reader truly feels like he/she’s right there, next to Katherine, as her story unfolds. We also get to see her story through a different perspective, that of her maid Dot. Dot is a poor and illiterate servant who became very close to Meg, Katherine’s stepdaughter, when they were held hostage during the Pilgrimage of Grace, a tragic event that left deep scars on all three women. Katherine has come to consider Dot, despite their difference in rank, as a daughter.

Of course, Fremantle takes, every now and then, artistic license to fill up the gaps in Katherine’s life. Although I don’t always agree with her interpretations and plot twists, they are realistic (apart from one instance in the end where I thought she went a bit too far) and make the story even more interesting. The book is also very well-researched and chockfull of details about life at the Tudor court, but these are woven into the story so seamlessly that they enhance it rather than bogging it down. I only found the stylistic choice of using the present tense to tell the story a bit weird. It works here, but I guess I’m just not that used to read historical fiction written in this way.

Summary:
Queen’s Gambit by Elizabeth Freemantle is a beautifully written, and meticulously researched, fictional account of the life of Catherine’s Parr, Henry VIII’s last queen. Freemantle really brings the characters, which are all well-rounded, and the Tudor court, to life. Although the author takes artistic liberties, her plots twists, save for one occasion, are realistic enough and make the story more interesting. The book is written in the present tense, which is a weird choice, but one that works.