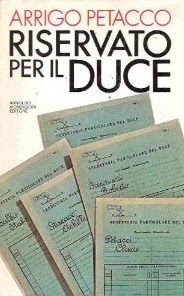 I’m not sure if this book, Riservato Per Il Duce (Confidential For The Dux) by Arrigo Petacco, was ever translated into other languages, but if it was, and you can get hold of a copy, I highly recommend you do so. Riservato Per Il Duce is a compilation of papers, notes, letters both personal and anonymous, gossip, police reports and any other document that landed on Mussolini’s desk and that he preserved in his personal archive. Mussolini was very meticulous and never threw away anything, not even an invitation to dinner.

Of course, throughout the years, his archive has been sacked and some of his papers disappeared, but still what remains is a tresure trove for any historian. These papers, which Mussolini, a former teacher, corrected with his blue and red pencil, gives us interesting insights into the fascist regime and the personal and political lives of its members. There are chapters dedicated to the medals undeservedly bestowed on memebers of the fascist party, the scandals that were hushed up, the public money they stole for their own personal gain, and the relatives they benefited with money and jobs, showing how little things have changed in Italy since then.

Other letters reveals glimpses on the relationship between the various members, of their friendships, jealousies and rivalries. And of course there is also a chapter dedicated to Claretta Petacci and her relationship with Mussolini. The book jumps from one topic to another, without much of an overarching structure and no in-depth analysis. But I enjoyed it. This is not supposed to be an essay, but simply a collection of tidbits that usually don’t make it into other books for lack of space or because they don’t fit in with the subject matter. The only problem I had with it was its size: it’s way too short and can be easily read in a day, leaving the reader wanting more.

Summary:
Riservato Per Il Duce by Arrigo Petacco is a collection of both personal and political papers found in Mussolini’s archive. Although the book jumps from topic to topic, its tidbits, which are rarely if ever published in other books on fascism, offer interesting insights into the fascist regime and the lives of its members. I just wish it wasn’t so short!

Available at: amazon.com and abebooks.it