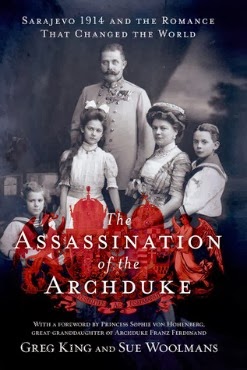 On June 28, 1914, Archduke Franz Ferdinand, the heir to the Habsburg throne, and his morganatic wife, Sophie, the Duchess of Hohenberg, were assassinated by Gavrilo Princip, a Serbian nationalist, in Sarajevo. The tragedy sparked World War I, and yet Franz Ferdinand and Sophie have been relegated to footnotes in history. Greg King and Sue Woolmans bring their story, and their romance, back into the limelight. They paint an intimate portrait of the unfortunate and enigmatic royal couple and set the record straight on the myths that still surround the archduke and his wife.

The authors didn’t have an easy task. The couple’s oldest son destroyed most of their correspondence, and no one, not even their heirs, know important personal details such as how Franz Ferdinand met his wife for instance. King and Woolmans had to rely mainly on diplomatic correspondence, newspaper reports and letters written by the archduke’s relatives, who weren’t fond of Sophie. Actually, that’s an understatement.

The romance between the heir to the Haspburg throne and a lady-in-waiting from an ancient aristocratic family scandalized the court. Sophie, not having a drop of royal blood in her veins, wasn’t deemed a suitable bride for a Haspburg. But Franz Ferdinand didn’t care. He made it clear he wouldn’t marry anyone else so, eventually, the emperor begrudgingly gave his consent to the union. They were only allowed a morganatic marriage, though, meaning that Sophie wouldn’t share her husband’s rank and their children would be excluded from the line of succession.

Sophie was constantly humiliated by the Haspburgs, but she never showed any resentment. Her husband, though, was infuriated by this appalling behavior and it was Sophie’s job to calm him. As a result, the couple, who was very dedicated to their three children, spent most of their time away from court. And when the visit to Sarajevo was announced, Sophie, knowing very well the risk her husband would be in (only the authorities underestimated it, the couple never did and even tried to avoid it), insisted on going with him. Her place was at his side, she argued.

King and Woolmans point out the many mistakes, lost opportunities and the poor security measures that led to the couple’s death, and examine the various theories and interpretations about the tragic event. They also humanize Franz Ferdinand and Sophie. Often portrayed as a cold reactionary, the archduke had a complex, but reserved, personality and wanted, once on the throne, to transform the dual-monarchy into a federation of equal states, believing it was the only way to make the big empire, which ruled over different ethnic groups eager for independence, survive. Sophie, accused of being a greedy social climber, was really a devoted mother and wife and Franz Ferdinand’s rock.

This is one of the best history books I’ve ever read and yet, one of the most difficult to get through because of how emotional it is. It is beautifully-written and extremely well-researched, but it tells such a sad story that you may often find yourself shedding a tear or two when reading the last chapters. But it’s a must-read all the same. It sheds new light on one of the most tragic couples of their time and on how their deaths changed history and shaped our world today.

Summary:
The Assassination Of The Archduke by Greg King And Sue Woolmans is a sympathetic, informative and beautifully written account of the tragic royal romance and the assassination that sparked world war I. Well-researched, the book provides valuable insights into the personal and political lives of the archduke Franz Ferdinand and his morganatic wife Sophie, sets the record straight on the myths that still surround them and examines the different theories about their murder. Highly recommended.