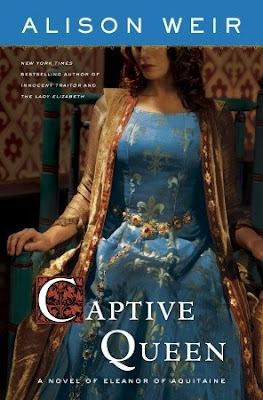 Synopsis:
Nearing her thirtieth birthday, Eleanor has spent the past dozen frustrating years as consort to the pious King Louis VII of France. For all its political advantages, the marriage has brought Eleanor only increasing unhappiness—and daughters instead of the hoped-for male heir. But when the young and dynamic Henry of Anjou arrives at the French court, Eleanor sees a way out of her discontent. For even as their eyes meet for the first time, the seductive Eleanor and the virile Henry know that theirs is a passion that could ignite the world.

Eleanor of Aquitaine is a very interesting and fascinating historical figure. She became duchess of Aquitaine, one of the largest and richest duchies in Europe, at the young age of 15, was the wife of two kings, Louis VII of France and Henry IV of England, and mother of three more. She went on crusade with her first husband and during Henry’s absences, she acted as regent, ruling the vast empire they had carved out. She was a patroness of the arts, a clever woman who wasn’t afraid to speak her mind and who supported her children’s rebellion against their father. When they lost, Henry imprisoned her. She survived her husband and died aged 82, during the reign of her younger son John.

This sassy and intelligent woman led a very unique life and I was very much looking forward to read Alison Weir’s take on it. But once I got the book in my hands, I really struggled to reach the end. Weir has reduced Eleanor to a sex-crazed woman who is driven by her lust and passion rather than ambition and realpolitik. It’s not just the fact that there is so much sex in this book to make it almost resemble a romance novel that bothers me, nor that some of the sex scenes sound very improbable (Henry manages to spend 3 nights with Eleanor while she’s still married to Louis and no one notices what the Queen of France is doing? Not very likely, is it?). No, I don’t mind sex in novels, but I mind independent and complex women being turned into sex maniacs.

And it gets worse. Eleanor often disappears from the chronicles of the time for months, which can be a good thing for writers as it gives them the opportunity to give free reign to their imagination. Although I belong to that class of people who prefer their historical novels to be as historically accurate as possible, I don’t mind authors taking poetic licence as long as it is done in a believable and plausible fashion. In this case, Weir has chosen to fill the gaps with gossips and rumours surrounding Eleanor, such as her having affairs with her uncle Raymond of Antioch and Geoffrey of Anjou, Henry’s father, which just reinforces the image of Eleanor as a woman who had only sex on her mind.

The writing style is awful too. I usually like the way Weir writes her biographies, which is clear and accessible. The style of this book is too, but not in a good way: it is just too modern. Now, I didn’t expect Weir to use the language used in Medieval times because that of course would have made the book hard to follow and put readers off, but in her effort to make it appealing to a modern audience, she overdid it and made her characters talk like young people do nowadays. The characters talk like they are all the best of friends, often using very modern and colloquial expressions that I doubt even existed back then.

However, the book is not all bad. Although, as the title suggests, Eleanor spends a huge chunk of the book imprisoned, which undoubtedly slows the pace down in the second part of the novel, what Weir really wanted to explore was her marriage to Henry and how their relationship evolved during the thirty-something years they were together. In this regard, her take on Henry’s relationship with Thomas Becket and his mistress Rosamud, and of how he kept the reigns of power well secured in his hands, allowing very little of it to his wife and children and the frustration this provoked in them, gave me interesting insights into what might have gone wrong in their marriage and why they behaved the way they did. Of course there’s no way of knowing if Weir’s speculation on the topic is correct, but it does offer interesting food for thought.
New York Times bestselling author Elizabeth Chadwick brings Eleanor of Aquitaine to life with breathtaking historical detail in the first volume of this stunning new trilogy.

Eleanor of Aquitaine, the legendary 12th century queen of France and later of England, is one of the most powerful and irrepressible women in medieval history, and her story of romance, scandal and political intrigue has fascinated readers for centuries.

Young Eleanor (or Alienor as she was known) has everything to look forward to as the heiress to the wealthy Aquitaine. But when her beloved father William X suddenly dies, childhood is over. Sent to Paris and forced to marry Prince Louis VII of France, she barely adjusts before another death catapults them to King and Queen. At the age of just 13, Eleanor must leave everything behind and learn to navigate the complex and vivacious French court. Faced with great scandals, trials, fraught relationships, and forbidden love at every turn, Eleanor finally sees what her future could hold if she could just seize the moment.

The first in this highly anticipated trilogy, The Summer Queen follows Eleanor through the Second Crusade to the end of her marriage to Louis VII. The author’s meticulous research (including delving into the Akashic records) portrays the Middle Ages and Eleanor with depth and vivid imagery unparalleled in historical fiction that will keep readers riveted and wanting more.

Summary:
Overall, The Captive Queen isn’t on par with other Weir’s books. The writing style is too modern, the pacing slow and the author has chosen to fill the gaps in Eleanor’s life with the clichés and rumours that surround her. Eleanor herself is portrayed as a sex-crazed floozy, instead than the sassy, strong-willed and cleaver woman that she was, which is very frustrating. However, the book offers some interesting insights into her relationship with her second husband Henry of England and what may really have gone wrong between them.