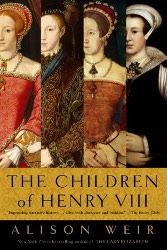 Let’s start with a little rant. The title of this book, The Children of Henry VIII, is very misleading. This isn’t a biography of Henry’s children, but a recount of the events that happened after his death up to the ascension of Elizabeth I to the throne. We’re told of how his heirs – his son Edward, his daughters Mary and Elizabeth and his grandniece Jane Grey – struggled for power and how their brief reigns shaped and changed the nation. Because of this, its previous title, The Children Of England: Heirs of King Henry VIII was a much more appropriate title and I can’t really figure out why they felt the need to change it. If they thought The Children Of England was too generic, they could just have removed that bit and kept only the second part of the title instead than changing it to The Children Of Henry VIII, which is only gonna cause wrong expectations that may prevent people from enjoying to the full a book that is otherwise insightful, informative, entertaining and very well-written.

And in a way, unusual. Historians usually pick one of these 4 figures and write a full biography on them, while their siblings and relatives are relegated to the background. But these people were all very closely related, they cared about each other, were distrustful of each other, argued with each other, laughed together and, although, because of their stations and ranks, they didn’t have the classic brother/sister/cousin relationship “common people” have, they still had a great influence on each other’s actions and lives, and contributed in shaping each other’s personalities. And they all had very distinct personalities and beliefs, which greatly influenced their rules and, in turn, the lives of millions of British people, sometimes to this very day. So, to see their stories intertwined together, their lives told as they happened, was really fascinating.

Weir gives to each monarch the space they deserve. Edward’s and Jane’s lives and reigns are dealt with just as in-depth as those of their more famous relatives Mary and Elizabeth. I really appreciated this as most historians, due to the minority of the first and the brevity of the second’s rule, have a tendency to relegate their reigns to footnotes, ignoring the importance they had on the country and on the other ruling figures of the time. Weir also paints all their portraits in a balanced and fair way. For instance, she’s not as hard on Mary as many historians tend to be, pointing out that her actions were the result of the years of pain and persecutions she and her mother, Catherine of Aragorn, were subjected to. The book also clearly explains that even autocratic monarchs couldn’t always do as they pleased. They had to deal with the aristocracy that was always plotting and conspiring in the background, and trying to lobby and influence their decisions. And sometimes, they had to give in to their wishes to avoid national crisis and maybe even deposition.

But the main reason why I love Weir’s books is that she makes history easily accessible to everyone. Her books don’t read like novels, but neither as boring biographies. They are full of interesting details, and quotes from first hand sources, which she manages to intertwine in the narrative in a way that enhances the book and makes it flow easily instead than bogging it down. The only downside is that footnotes in her books are often lacking, so it’s not always easy for those who want to verify the sources to track them down. I’m not sure if this is her choice or the publisher’s, but in any case adding notes would only improve the book and enhance the credibility of the author so I hope they will be included in her future works.

Summary:
The Children Of Henry VIII by Alison Weir focuses on the tumultuous events between Henry VIII’s death and the ascension of his daughter Elizabeth to the throne. In the book, the stories of Henry’s heirs – his children Edward VI, Mary I and Elizabeth I, and his grandniece Jane Grey, are intertwined together, showing the reader how each of them helped shape each other’s personality and their country. It’s a very insightful and informative book written in an easy-to-understand, entertaining way that flows easily. However, the title is misleading and footnotes are missing.