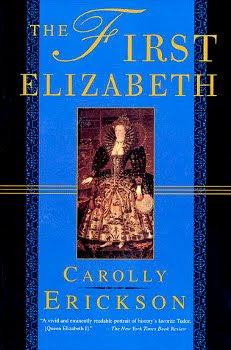 The First Elizabeth by Carolly Erickson was the first Tudor biography I ever read and I loved it. It sparked my obsession interest in this great Queen and her dynasty and, over the years, I’ve read anything I could get my hands on on them. Lately, I’ve decided to reread The First Elizabeth and this time, I didn’t enjoy it as much. I still think it’s a good book but I have mixed feelings about it.

What I really enjoyed is Erickson’s writing style. The book reads more like a novel than a historical biography, which will be especially appealing to those who think history books are boring. The book flows really easily and it is chock full of details about sixteenth century England, giving you a real feeling of what life at the Tudor court was like. Yet, all this wealth of information is never overwhelming or tedious, but instead the reader feels like she’s listening to a friend relating the story of this great Queen and her era over a nice cup of tea.

However, considering how many interesting details this biography contains, I was very disappointed to find that Elizabeth’s story is told in a rather superfluous and quick manner, especially towards the end. Her childhood and teenage years are well-covered providing some really interesting insights. Her studies, her experiences, her tutors and governess and her terrifying spell in the Tower when Mary became Queen help make us understand why she became the woman she was and ruled the way she did.

However, a lot of important events are barely covered. The part dedicated to the Invincible Armada is really short and even the Queen’s relationship with her favourite Robert Dudley isn’t explored in depth. His wife Amy’s death is briefly discussed too and it’s just a recollection of the basic facts and lots of gossips. Carolly doesn’t seem to bring about or support a theory in particular either. The political events of the last years of her reign, such as Essex’s betrayal, are also barely mentioned. You’ll learn the gist of it and that’s it. It made me feel like someone had decided that the book had to be tot pages long and so some important events, and in particular those happening during the last 20 years of her reign, had to be glossed over for lack of room..

Overall, while Erickson is great at engaging the reader with her lively writing style, she doesn’t portray a throughout and accurate (she does rely too much on gossip sometimes) of Elizabeth I and her reign. I would recommend The First Elizabeth to those who don’t much about the Queen, but Tudor buffs may want to avoid it cos it’s a very synthetic biography of Elizabeth I and doesn’t really say anything they don’t already know and no new (nor old) theory is really discussed.

Summary:
Overall, The First Elizabeth is a good introduction to Queen Elizabeth I and her reign. Written in a lively and engaging style that reads more like a novel,it is packed with details about life in the Tudor era and court. However, lots of events of her life and reign are glossed over and, rather than discussing any new theory, the author relies a bit too much on gossip, which is why I wouldn’t recommend the book to Tudor buffs.

Available at: Barnes & Noble and Amazon.com