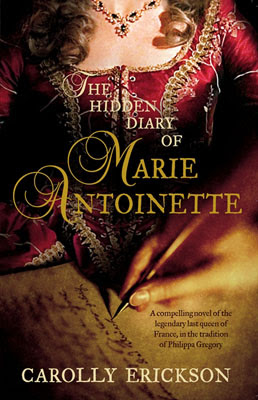 Synopsis:
Imagine that, on the night before she is to die under the blade of the guillotine, Marie Antoinette leaves behind in her prison cell a diary telling the story of her life—from her privileged childhood as Austrian Archduchess to her years as glamorous mistress of Versailles to the heartbreak of imprisonment and humiliation during the French Revolution.
Carolly Erickson takes the reader deep into the psyche of France’s doomed queen: her love affair with handsome Swedish diplomat Count Axel Fersen, who risked his life to save her; her fears on the terrifying night the Parisian mob broke into her palace bedroom intent on murdering her and her family; her harrowing attempted flight from France in disguise; her recapture and the grim months of harsh captivity; her agony when her beloved husband was guillotined and her young son was torn from her arms, never to be seen again.
Erickson brilliantly captures the queen’s voice, her hopes, her dreads, and her suffering. We follow, mesmerized, as she reveals every detail of her remarkable, eventful life—from her teenage years when she began keeping a diary to her final days when she awaited her own bloody appointment with the guillotine.

The Hidden Diary of Marie Antoinette is Carolly Erickson’s first effort at a historical novel and a very poor one at that. While the book is a light read and quite enjoyable for those who don’t know much about Marie Antoinette, those who are familiar with her story will be very disappointed at how historically inaccurate this book is.

As the name states, this book is written in a diary form. In this diary, Marie Antoinette tells the story of her life, from her idyllic childhood in Austria, to her arrival in France full of hopes for the future, to the difficult years of her marriage and life as Queen, the joys and sorrows of motherhood, the outbreak of the French Revolution and to her imprisonment. Some of the entries are long, others short, but most are frivolous and superficial. Only when she becomes a mother, and later when the Revolution starts, the entries start getting a bit more serious but overall, the Queen comes across as self-absorbent, vain and immature. Her kindness and good heart are sometimes mentioned too, but overall, I found it hard to feel sorry for the woman portrayed in this book.

The other characters are pretty bland too. Louis XVI is portrayed as a complete idiot, the Duchess Of Polignac, who was one of Marie Antoniette’s best friends, barely makes an appearance, while the Princess de Lamballe is always referred to as Lou Lou, so if you don’t know that that was her nickname, you’ll have to wait till the end of the book to find out who this character is. Instead than focusing on the real characters at the court of Louis XVI, Carolly Erickson felt the need to invent new ones: Eric, a servant the young Marie Antoinette has a crush on  and his twisted and jealous wife Amelie who is the villain of the story. Both are just boring, far-fetched and don’t enhance the story in any way.

On the contrary, to focus on them (and on the affair with Count Fersen which very likely never happened and he certainly never took the Queen to Sweden), we miss important events in Marie Antoinette’s life. The Affair of the Necklace isn’t talked about at all, which was a huge disappointment, nor there is any mention on how the queen felt about the lewd rumours and pamphlets circulating about her. Details of her friends, her habits and the world she lived in are also lacking. I would have enjoyed this book a lot more if it had focused more on what really happened instead than making nonsense up to spice things up. I find Marie Antoinette’s life interesting enough without having to invent anything.

Summary:
The hidden diary of Marie Antoinette by Carolly Erickson is a mediocre novel. The book is not very historically accurate, important events like the Affair of the Necklace are missing to make room for fictitous ones that just aren’t credible at all. There is a severe lack of information about life at the French court and its protagonists. Instead, new characters are made up, although they don’t add anything to the story. They actually cheapen it. Those who don’t know anything about Marie Antoinette may enjoy this book, but if you are like me and like historical novels to be accurate and the fictitious parts to be at least plausible, then you should skip this as it’ll only disappoint you.