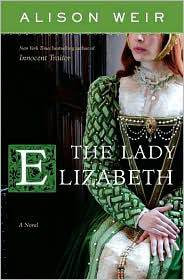 Synopsis:
Even at age two, Elizabeth is keenly aware that people in the court of her father, King Henry VIII, have stopped referring to her as “Lady Princess” and now call her “the Lady Elizabeth.” Before she is three, she learns of the tragic fate that has befallen her mother, the enigmatic and seductive Anne Boleyn, and that she herself has been declared illegitimate, an injustice that will haunt her.
What comes next is a succession of stepmothers, bringing with them glimpses of love, fleeting security, tempestuous conflict, and tragedy. The death of her father puts the teenage Elizabeth in greater peril, leaving her at the mercy of ambitious and unscrupulous men. Like her mother two decades earlier she is imprisoned in the Tower of London–and fears she will also meet her mother’s grisly end. Power-driven politics, private scandal and public gossip, a disputed succession, and the grievous example of her sister, “Bloody” Queen Mary, all cement Elizabeth’s resolve in matters of statecraft and love, and set the stage for her transformation into the iconic Virgin Queen.
Alison Weir uses her deft talents as historian and novelist to exquisitely and suspensefully play out the conflicts between family, politics, religion, and conscience that came to define an age. Sweeping in scope, The Lady Elizabeth is a fascinating portrayal of a woman far ahead of her time–an orphaned girl haunted by the shadow of the axe, an independent spirit who must use her cunning and wits for her very survival, and a future queen whose dangerous and dramatic path to the throne shapes her future greatness.

Alison Weir is one of my favourite historians. Her non-fiction works are not only well researched, but they also read like novels, making the readers feel like they were there, centuries in the past, watching while history unfolded under their own eyes. And yet, her novels really bore me. The Lady Elizabeth, which tells the story of the Virgin Queen before she came to the throne, is a much better effort than The Captive Queen, a story of Eleanor of Aquitaine, but it is still very slow and dull.

The novel starts just after Anne Boleyn’s execution, with Elizabeth, then just a little toddler, wondering why people have stopped calling her Princess. Her half-sister Mary will have the painful task of revealing her mother’s tragic fate to her. After that, Elizabeth’s life became very uncertain. She saw stepmothers come and go, became infatuated with Thomas Seymour, and in the reign of her sister Mary, had to fight to keep her head on her shoulders (literally) as her supporters came up with plots to put her on the throne. She even endured imprisonment in the Tower, believing she wouldn’t get out of it alive.

I think Weir does a wonderful job at portraying how the relationship between Mary and Elizabeth developed and changed throughout the years. At the beginning, Mary genuinely loved Elizabeth and felt sorry for this little girl who had so brutally lost her mother, but as they got older, Mary became more and more suspicious and jealous of her step-sister, seeing her as a clever, malicious and lying young woman who couldn’t wait to get her hands on her throne.

Weir also tries to get into Elizabeth’s head and heart and imagine how she must have felt when her mother died, when she heard her stepmother Catherine Howard had been executed, why she didn’t want to get married, what feelings she had for Thomas Seymour, what she went through when in the Tower, knowing that even if she would survive, she would always be in danger as long as people kept plotting in her name. I find that, very often, Weir’s suppositions were realistic and believable. She made Elizabeth come to life, and I really enjoyed that.

Although she mostly remained faithful to the historical record, like any novelists, Weir took some liberties. For instance, in the book Elizabeth has a brief affair with the admiral and becomes pregnant with his child. She then has a miscarriage and the baby is thrown into the fire to destroy the evidence of her fall. Things like these really annoy me because they perpetuate myths that historians have already debunked so many times before. Yet, a lot of people read them in novels and, especially when these are written by historians, assume they are true.

I almost gave up the book at this point, but then I decided to persevere and, once at the end, I found an appendix when the author explains why she decided to include this myth even though she doesn’t believe in it, obviously. This made me feel a bit better as the reader does get the real, accurate story in the end, which is something that doesn’t happen with most novels (and editors are more often to blame for that than authors).

Yet, I found the book really slow at the beginning. It does get better once Mary gets to the throne as that’s when the most dangerous phase of Elizabeth’s life (as far as it is covered in this novel) starts. But the writing style remains bland and, at times, even cheesy. It just isn’t as incisive as the story demands and, because of it, it doesn’t allow the reader to connect with the characters. I just didn’t care that much about them, which is unusual for me, as I love the Tudor era. Overall, despite its shortcomings, I would still recommend this book to Tudor fans. It’s a fairly accurate portrayal of Elizabeth and everything she had to go through before becoming Queen.

Summary:
The Lady Elizabeth by Alison Weir tells the story of Elizabeth I before she become Queen. Although the book is fairly accurate, the author takes a few liberties, especially when focusing on her relationship with Thomas Seymour, which not everyone may enjoy. And while Weir tries to imagine what Elizabeth’s thoughts and feelings were during the first uncertain and sometimes dangerous years of her life, she does so in a dull and bland tone that doesn’t make you relate to the characters.