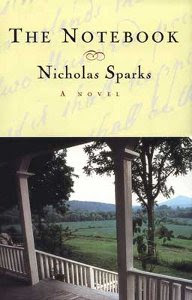 Synopsis:
North Carolina, October 1946. Noah Calhoun has recently returned from war: he tried to forget the horrors he has seen and experienced by restoring an old plantation home. But though his days are spent working, his nights too often give way to dreams of his past. Fourteen years ago Noah fell in love with a girl, and he is still haunted by his memory but convinced he will never find her again. But when the past slips into the present, Noah realises his ghosts are never far away.

The Notebook is Nicholas Spark’s debut novel. When it first came out in 1996 I paid no notice to it cos I thought it would be just another cheesy and boring love story. Then, a few years later, I saw the movie and completely loved it. And because books are (almost) always better than the movies they inspire, I decided to read the book too. And it didn’t disappoint at all. The basic idea of the story is just so beautiful: an old man, Noah, reads to his wife Allie, who is suffering from Alzheimer’s, the story of how they fell in love and got together, hoping this would bring her back to a lucid state, even if for just a few seconds. That alone is enough to pull at your heart’s strings.

This book just proves that love conquers all. Allie’s illness is just the last hardship the two lovers have to face. They were separated by World War II and spent years apart, not knowing anything about the other, when Allie came back into Noah’s life. Engaged to another man. Everything seems to be against them and you can feel their dilemmas, just as you can feel the deep, everlasting love they have for each other. I also liked that, unlike it happens in many romance novels, sex is not a predominant theme in the book. Yes, there are some sex scenes, but theirs is a union of souls first and foremost, not just of body. That’s so refreshing, and so is the fact that the main protagonists are now old. Romance in elderly years is not something you find very often in books these days.

I also love the way Nicholas Sparks writes. Before reading his books, I was convinced men couldn’t write about romance and love. I’ve read lots of love stories written by men but I found them cold, like something was missing.. Spark’s writing style is, instead, almost poetical and he has the ability to make even the smallest things seem special. He also really gets into the head of the protagonists, beautifully expressing their personalities and feelings. There really is nothing that I didn’t enjoy about this book but if I really have to find a fault with it, I’d say that sometimes the pace is quite slow, which is something that some people may find irritating. I thought it suited the story perfectly though.

Summary:
The Notebook by Nicholas Sparks is one of my favourite books ever. It tells the story of an old man that’s reading from a notebook their love story, and the hardships they had to face to be together, to his Alzheimer’s-suffering wife. The story is very moving and it often brought a tear to my eyes. The writing style is beautiful, almost poetical, yet the story is realistic. However, the pace is slow.