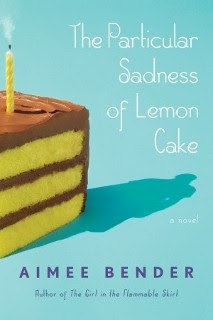 Synopsis:
On the eve of her ninth birthday, unassuming Rose Edelstein bites into her mother’s homemade lemon-chocolate cake and discovers she has a magical gift: she can taste her mother’s emotions in the slice. To her horror, she finds that her cheerful mother tastes of despair. Soon, she’s privy to the secret knowledge that most families keep hidden: her father’s detachment, her mother’s transgression, her brother’s increasing retreat from the world. But there are some family secrets that even her cursed taste buds can’t discern.

ALERT: The following review contains spoilers. If you don’t want to know them, stop reading now or just skip to the summary.

When I finished reading The Particular Sadness Of Lemon Cake by Aimee Bender, I didn’t quite know what to make of it. If I had to describe the book in three words, I’d say it is weird, unfinished and selfish. Weird because the plot is crazy, at times completely absurd. Unfinished because both the characters and themes in the novel are underdeveloped, and a lot of things left unexplained, and when I finished it I just couldn’t believe there was no more to read; in fact, it made the book feel even more weird. And selfish because all the main characters are a bunch of selfish, self-absorbed brats who only think about themselves. And this is what really spoiled the book for me.

All the members of the Eldelstein family (apart from the mother) have a different magical gift (or a curse as they seem to view it). Rose discovers hers when she’s 9: she can feel what other people are feeling by eating the food they cook. And that’s how she discovers first that her mother is unhappy and then that she has an affair. Distressed, she tries to confront her mother, who denies anything’s wrong. And so Rose notes, “I was having trouble trusting her cheer. I knew if I ate anything of hers again it would likely give me the same message: Help me, I am not happy … And now my job was to pretend I did not get the message.” And she will pretend that for most of her life. She starts to eat only foods made in factories so that she can eat without feeling other people’s emotions. Once grown up Rose uses her ability to become a chef and is hired by a girl who works with teenagers to help her out with them, but is all too quick to point out that she’s willing to help only once in a while! That’s still more that can be sad for the other members of her family though.

Her grandfather could smell people’s feelings and so he went around with a strap on his nose. Her brother, a nerd who doesn’t know how to live in the real world, instead than trying to overcome his fears and the obstacles life inevitably throws at you, and just grow up, prefers to turn himself permanently into a chair. WTH? Excuse the expression, but seriously, a chair? One day he just becomes one, leaving his parents completely devastated. Only Rose knows the truth but she doesn’t reveal it anyone, probably because it is so absurd no one would believe her anyway. Finally, her father thinks he could discover his power if he went into a hospital and so refuses to go into one even when his kids are born or seriously ill.

Because these gifts are passed onto each generation by her father’s side of the family, Rose’s mother is normal. But that doesn’t make her any less selfish. She met her husband at the garage sale he was holding and, disappointed at not having what she was looking for, he offers to take her to other yard sales while his friend, upon his request, tries to procure the desired object. And when they return and she sees it, she thinks it is fate. They date, get married and on her wedding day she’s told that it wasn’t fate after all, but her new husband’s doing. Instead than being pleased at what lengths he went to win her, she’s disappointed. She believes in signs and because that wasn’t one, she starts to think she’s made a mistake and views her husband differently. In time she cheats on him, and when her daughter nonchalantly reveals she knows about it, she offers to give her man up. But because Rose doesn’t seem to be too bothered by the affair, she doesn’t and keeps seeing her man for years and years, which just isn’t fair on anyone involved including her lover.

If you’re looking for a morale, you won’t find it here. What you’ll find is a lot of wasted possibilities and opportunities. What really irked me was the fact that no one seems interested that their gifts, if used properly, could help a lot of people and do a lot of good. I realise that having such a gift can be hard and that there will be times when you just want to be left alone, but it seems that the Eldenstein family just concentrates on its negative sides. Their only care is that their gifts, or curses, don’t interfere with their daily life and if someone could benefit from them, well hard luck. They won’t help you. Well, Rose will, but only once in a while. I honestly don’t get it. What’s the point of having a gift, magical or not, if you’re not gonna use it by sharing it with other people and making their life better?

Ok, the Eldensteins are a very dysfunctional family where all problems are hidden and everyone pretends everything is fine all the time, and growing up in such a family mustn’t have been easy for the children, especially with the powers they have. But they must have met someone else outside the family that needed help and realised that, despite the situation at home, there is a lot of good they can do. But noone, apart from Rose and even then only a little, tries. To me, the book just shows how selfish our modern society encourages us to be. Life is difficult for everyone, which is why we should all try to help one another instead than just focusing on ourselves and our own problems, or better trying to carry on as normal as possible not to face them.

It is true that Bender’s writing is charming at times, and I have heard lots of great things about this book, but I just couldn’t like it. Because it is unfinished. Of all the issues mentioned (their powers, the breakdown of her parents’ marriage, the hypocrisy in the family, her mother’s affair…), none is fully developed and has a definitive answer at the end. And the characters never really grow up. If only the issues had been explored more in-depth or the characters developed more, then this would have been a wonderful book.

Summary:
The Particular Sadness Of Lemon Cake by Aimee Bender has the potential to be a wonderful book, but instead it turns out to be quite disappointing simply because it isn’t finished. A lot of important and interesting issues such as the hypocrisy of middle class families and the difficulties of having magical powers are not-explored in depth, the characters are a bunch of selfish people who never grow up and prefer to retract from life instead than facing its challenges, and there is no definite answer or message at the end. The writing style is charming though.

Available at: amazon UK, amazon US and Barnes & Noble