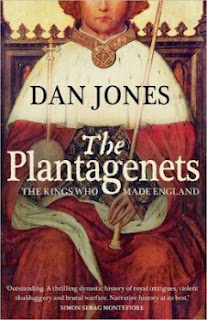 These days, it’s all about the Tudors. But the dynasty that preceded it is just as interesting, if not more. The Plantagenets ruled England from 1154, when Henry II ascended to the throne, till 1485, when Richard III was killed at the battle of Bosworth Field. But that’s not mentioned in The Plantagenets, by Dan Jones. The author stops his narration in 1399, the year Richard II was deposed. There are a couple of reasons for that. First off, the following Plantagenet monarchs belonged to a different branch of the family (Lancastrian). The second? Including all the Plantagenet kings would have made what is already a very long book, even longer.

But long doesn’t mean boring. Jones has chosen the format of narrative history, which means few dates, quotes and citations. But also a lively narrative that reads like a novel. The story begins in November 1120 when the White Star, a large boat carrying the heir to the English throne, sank. England was left without a successor and when Henry I died, the country was plunged into a civil war fought between the king’s daughter, Matilda, and his nephew, Stephen. The winner? Matilda’s son, who became Henry II.

Henry II ruled over a vast empire that comprised England and most of France. Married to the formidable Eleanor of Aquitaine, he had to spend the last years of his reign fighting his own children, who had rebelled against his rule. Two of these children would eventually follow him on the throne. Richard I, better known as the Lionheart, fought in the crusades and barely spent any time in England. His brother King John exercised power arbitrarily and cruelly and was therefore forced by his barons to sign the Magna Carta.

The reign of Henry III saw the beginning of what we now know as Parliament, while his son Edward I, nicknamed Longshanks, is famous for the harsh way in which he conquered the Welsh and the Scots. He was followed by Edward II, who surrounded himself with a few privileged favourites to whom he was incapable of denying anything, which eventually led to discontent and political unrest. He was deposed by his wife Isabella and her lover Roger Mortimer, who seized the throne in the name of her son, Edward III.

Edward III wanted to reconquered the French lands his ancestors had lost. He started the Hundred Years War and, together with his son Edward, nicknamed The Black Prince, won many important battles. Unfortunately, The Black Prince died before his father and so the throne passed to his son, Richard II, who played a major part in the repression of The Peasant’s Revolt. The event scarred Richard who became more and more paranoid, and therefore, more autocratic. He was finally deposed by his cousin, Henry Bolingbroke.

Jones makes the Plantagenets and their world vividly come to life. His writing style is entertaining and enjoyable, and the story is never bogged down by unnecessary details. It is also straightforward. Dan clearly explains how each monarch influenced the rule of his successor and shaped the country, developing “aspects of English law, government, architecture, art and folklore that survive to this day”.

However, given the vastness of the topic, the author cannot go into too much detail into each king and his reign. Only the main events are highlighted. Therefore, if you are familiar with this dynasty, you won’t find much here that you didn’t know already. But for everyone else, this is a wonderful and insightful introduction to this medieval royal dynasty.

Summary:
The Plantagenets by Dan Jones is an entertaining and insightful introduction to the Plantagenets. Written in the format of narrative history, the book lacks citations, most dates and notes. But it makes up for that by painting a vivid picture of the Plantagenet kings, bringing them to life and explaining, in a straightforward manner, how they influenced their country in ways that still affect us today.