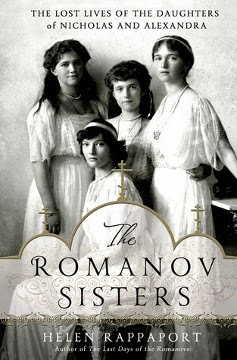 When I first requested a copy of The Romanov Sisters: The Lost Lives Of The Daughters of Nicholas And Alexandra by Helena Rappaport, I thought it would be one of those difficult reads that would take me ages to finish. Why? Because the fate of this wonderful family was so tragic, I thought I could only bear reading it in small doses. But I devoured it. Rappaport’s style is engaging and compelling. Once you start reading the book, you just cannot put it down.

Thanks to a treasure trove of diaries and letters from the grand duchesses to their friends and family, some of which had never been published before, Rappaport manages to bring the four Grand Duchesses back to life. During the decades, the sisters have been turned into a faceless and undistinguished mass. The fact that they themselves used the term OTMA to refer to themselves, often wore similar white dresses, and were paired in groups of two by their own mother, only reinforced this erroneous impression. In reality, each Grand Duchess had a very different personality and individuality. Olga was the bookworm, with an intellectual bent. Tatiana took a lot after her mother, was very practical and was famous for her nursing skills. Maria was a placid and sweet creature, while Anastasia had an irrepressible but good nature.

All of them though, even once grown-up, retained a certain innocence about the world, which was due to the seclusion in which they had always lived. Although they were the most popular princesses in Europe, the details of their daily lives were hidden from a public who wanted to know more about them. Alexandra, who was very often ill and had an aversion for society, and Nicholas, wanted to give their daughters as normal an upbringing as possible, without however, letting them forget their positions and the duties that came with them. As a result, the four sisters (and their brother), grew up with barely any friends and eager for any information about the world outside their palace. They grew up into sweet and caring women devoted to their family, their country, and God, but to the Russian people they, like their parents and brother, were strangers.

Rappaport doesn’t just manage to present the Grand Duchesses as individual women, allowing you to finally be able to tell them apart, but she also reveals details about their daily lives no one else had ever mentioned before. There is new information about the Grand Duchesses, their brother, and their parents on most pages! Quite a feat, if you consider how many volumes have been written about this unfortunate family! Placed in the proper context, this information helps us gain a deeper understanding of who the Romanov were, why they acted the way the did, and what their relationship in the family dynamic was. I had never realised, for instance, the terrible toll her frequent pregnancies, which resulted mostly in the births of girls, and the illness of her only son had on Alexandra’s health, and how much that impacted the family, increasing their seclusion and their distance from the Russian people.

As I reached the end, I couldn’t help but hope the story had ended differently. The last days and deaths of the Romanovs are covered in just a few sentences though. That’s because Rappaport has already written a wonderful book, Ekaterinburg, on the subject. While I do understand her choice, I wish she had given us a few more details, just to make the story more complete. As it is, the end is quite rushed. All the same, though, this is a must read for any fans of the Romanov family. It will greatly enrich your understanding of all its members.

Summary:
Meticulous researched and compellingly written, The Romanov Sisters: The Lost Lives Of The Daughters Of Nicholas And Alexandra By Helen Rappaport, brings the four Grand Duchesses, each with its own distinct personality and individuality, back to life. The book, which draws heavily from diaries and letters from the grand duchesses to their friends and family, features lots of never-published-before information on their daily lives that will greatly enrich your understanding of this wonderful but tragic family. The end, though, is a bit rushed.