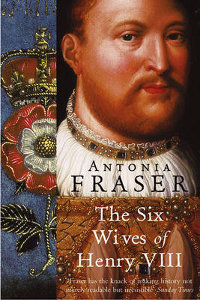 Divorced, beheaded, died; Divorced, beheaded, survived. The Betrayed Wife, The Temptress, The Good Wife, The Ugly Sister, The Bad Girl and The Mother Figure. The six women who have married Henry VIII and helped shape the events of the era are known to us only by the way they died and by the stereotypes that have been attached to them throughout time. In this biography of Catherine of Aragorn, Anne Boleyn, Jane Seymour, Anne of Cleves, Catherine Howard and Catherine Parr, historian Antonia Fraser has decided to to look at the women behind the stereotypes, bringing to life their true personalities.

And she does an excellent job at that. The political, religious and social aspects of the time remain in the background here. They’re explained to make us understand in what society and environment they lived and died in, but the main focus is on these six amazing women. Although Fraser sympathizes with them (and how could you not to?), she portrays them in an honest way, pointing out their good qualities without hiding or downplaying their flaws. We also get to know what kind of clothes they liked to wear, what pets they kept, what their interests were, what they were passionate about, what made them tick and what their motives were to act the way they did..

Henry VIII obviously has a main part in the book too. Fraser tries to bring to life his true personality and the portrayal that comes out is not very flattering. The book is extremity well-written and chock full of information, yet apart from a few rare dry patches, it flows really easily and is a joy to read. It’s a solid, strong book that will give you a better understanding of who these 6 women were as individuals. They were victims, but not willing victims. They lived in a time where women had no rights, yet they were intelligent, courageous and spirited women who tried to have some control over their lives and make, in the small ways open to them, their own decisions, although not all of them were wise enough to know when to stop. Overall, I would recommend it anyone interested in the Tudor era.

Summary:
The Six Wives Of Henry VIII by Antonia Fraser is an informative and enjoyable biography about the women who married the second Tudor monarch. Fraser goes beyond the stereotypes to bring to life the individual personality of each woman, their good qualities and flaws, their tastes and their reasons for acting the way they did.. A must read for every Tudor fan.