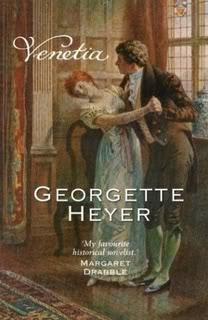 Synopsis:
In all her twenty-five years, lovely Venetia Lanyon has never been further than Harrongate, nor enjoyed the attentions of any but her two wearisomely persistent suitors. Then, in one extraordinary encounter, she meets a neighbour she only knows by reputation – the infamous Lord Damerel – and before she realizes it, finds herself egging on a libertine whose way of life has scandalised the North Riding for years.

Venetia was the very first Georgette Heyer book I ever read and I’m glad of that as, for those who have never read any novels from this author, this is a great place to start. Venetia is a delightful, highly-enjoyable read with interesting and well-developed characters, witty dialogues and a great story, set in the Regency era three years after the Napoleonic wars.

Venetia is a beautiful, clever and cheerful girl who has lived a secluded life. At 25, she is still running her brother Conway’s estate and taking care of their little lame but very intelligent brother Aubrey and has never left the country. She is very realistic about her situation. She knows she will have to either resign herself to spinsterhood or marry one of her boring suitors: the dull and pompous Edward Yardley who can’t believe Venetia doesn’t want to marry him despite her having told him so several times and the young, emo Oswald Denny who idolizes Lord Byron.

But one day, she meets Lord Damerel, a charming rake who scandalises the neighbourhood and the two become fast friends.. Actually, more than friends, and much to the dismay and desperation of her friends. Although at first Damerel considers her as just another girl to seduce, her frankness (she always says what she thinks), wit and the fact that she is willing to get to know him and judge him for who he is rather than believing all the bad rumours about him, soon gain his respect and affection. He knows that her reputation may be sullied by marrying a man with his reputation and the two part ways. I don’t really wanna say too much about the end as I don’t wanna spoil it for you in case you haven’t read it, so suffice it to say that Venetia goes to London where there is a surprise in store for her.

This book is about meeting your soulmate. While you can clearly feel the sexual tension between Venetia and Damerel (there are no bedroom scenes, but sparks do fly and that’s hotter than any more explicit sex scenes modern romance books are filled with), there is a lot more to their relationship than just sexual chemistry. These are two people who have led two very different lives but share the same interests, sense of humour, wit and they both have a certain disregard for social conventions (Damerel more than Venetia). Theirs is a meeting of souls.

Like always, Heyer vividly portrays the world in which her characters live, paying a lot of attention to historical details. The books also flows easily, but it might take you a while to get into the story if you’re not familiar with the Regency way of speaking. Her characters, in fact, often use words and expressions that were commonly used in the Regency era but rarely or just not anymore used today. I actually love that as it makes the story even more real. In addition, Heyer’s prose is lively, witty and sparkling and, once used to the Regency language, a true pleasure to read.

Summary:
If you have never read a Georgette Heyer book before, Venetia is the perfect place to start. Venetia is one of Heyer’s masterpieces and it has all the elements that make her books such delightful reads: a great story with well-developed characters, witty dialogue and prose full of Regency words and expressions (which may make reading a bit hard at first if you’re not familiar with them) and a lot of attention to historical details. All in all, a very enjoyable read.