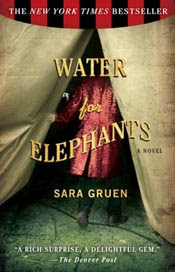 Synopsis:
As a young man, Jacob Jankowski was tossed by fate onto a rickety train that was home to the Benzini Brothers Most Spectacular Show on Earth. It was the early part of the great Depression, and for Jacob, now ninety, the circus world he remembers was both his salvation and a living hell. A veterinary student just shy of a degree, he was put in charge of caring for the circus menagerie. It was there that he met Marlena, the beautiful equestrian star married to August, the charismatic but twisted animal trainer. And he met Rosie, an untrainable elephant who was the great gray hope for this third-rate traveling show. The bond that grew among this unlikely trio was one of love and trust, and, ultimately, it was their only hope for survival.

Water For Elephants by Sara Gruen is a book I’ve wanted to read for a long time. I’ve read so many great things about it and I was curious to see what the hype was about. And it’s a very enjoyable read indeed. The story is nice, well-written and well-researched and Gruen beautifully and realistically brings to life the world of the circus during the Great Depression in America. However, I couldn’t help but feel a bit disappointed too. Maybe I was just expecting too much but I found the character too flat and some parts of the books, especially the beginning, quite slow.

Jacob Jankowski is a ninety-something year old man living in a nursing home. He’s bitter, alone and wasting away and my heart really went out to him. This part of the book really made me reconsider how we treat our elderly, like when we hide from them our problems or other bad things that we think may upset them, or say soothing words and coax them, helping them do things they are still capable to do and want to do themselves because we think they should rest instead. We may have the best intentions at heart, but are really treating them like children and making them feel like they’re useless and not good for anything anymore.

When the circus arrives in his town, Jacob starts recalling his life in the Benzini Brothers traveling circus, which he joined after the sudden death of both his parents. He had studied veterinary science and needed only to take his final exams to get his degree but that doesn’t matter to the circus owner. He needs a vet and so Jacob got the job. By tending to the animals he meets the beautiful Marlena, an equestrian performer, and her psychotic husband August, the animal trainer. Along the road, they also pick up Rosie, an elephant who doesn’t obey the commands of the trainer and is abused for it, which disgusts both Jacob and Marlena. And it’s not just the animals the are being abused. Not all those who work in the circus get paid regularly and some even suddenly disappear during the night.

Reading the book it is clear that Gruen has done her research meticulously. The descriptions of what life was like in the circus at the time are spot-on and accurate. She uncovers the gritty, raw, nasty reality behind the glitz and glamour of the show that’s all the spectators usually see. She shows us how the performers and workers were treated and exploited, their relationships, friendships and sympathies but also jealousies and enmities, and what happened when a circus went bankrupt. Even the language is accurate, with characters talking just like they would have done at the time. There is also a surprising twist in the end, when Gruen reveals the dark secret she had hinted at in the prologue.

Although the story is well-researched and has a nice and interesting plot, the characters are rather dull and flat. Marlena has a good heart and loves animals but apart from that, she seems pretty ordinary and boring, and I couldn’t see why Jacob fell for her. And that’s why I didn’t care about their relationship. I didn’t notice any chemistry there, no sparks flying.. Even her jealous husband August and Uncle Al, who are the baddies of the book, failed to make a big impression on me. I wish Gruen had developed the characters more, as that would have made the story both more enjoyable and more believable. But overall, it’s an entertaining story that, despite its flaws, really pulls the reader in.

Summary:
Water For Elephants by Sara Gruen is a well-researched book that brings to life the world of a Depression-era traveling circus, the glitz and glamour of an awe-inspiring show and the gritty and raw reality of abuse, cruelty and enmity behind the scenes. However, the characters aren’t deeply and fully developed and because of it, the love story between Jacob and Marlena lacks chemistry. The baddies too don’t make much of an impression. All in all though, Water For Elephants is a well-written and entertaining story that engrosses the reader into a world that many of us don’t really know anything about.