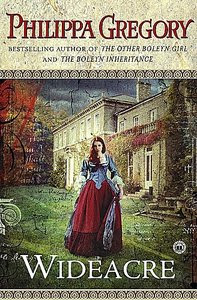 Synopsis:
Wideacre Hall, set in the heart of the English countryside, is the ancestral home that Beatrice Lacey loves. But as a woman of the 18th century, she has no right of inheritance. Corrupted by a world that mistreats women, she sets out to corrupt others.

I read Wideacre when I was a teenager and while I completely forgot all about most of the not-that-good books I read at the time, this one I still remember all too well. And not for good reasons. I think I can safely say it is the worst book I have ever read and it took me ages to finish it. You just need to read it in small doses and even then, have a very high tolerance for ickiness, which I don’t. I was so disgusted by it that I refused to read the other two books in this trilogy. So, why didn’t I like this book?

I loathed the protagonist, Beatrice. She is completely obsessed with the family estate, Wideacre, and wants to live there for the rest of her life. But we’re in Georgian England. Beatrice is expected to marry some nobleman and go live with him in a new, big house while Wideacre will be inherited by her brother Harry who never showed any interest in the house and land she loves so much. Her frustration and her determination not to resign herself and do something about it is perfectly understandable. But what isn’t is that she’s willing to go to extreme lengths and won’t stop at nothing – including incest and murder – to get what she wants.

First, with the help of her lover Ralph, she hatches a plan to kill her father and manipulate her brother to keep control of the property. She regrets this and wants to stop Ralph but it is too late. Once her daddy and her lover are out of the picture, she needs to come up with a plan to exercise control over Harry. She finds out he has a fetish (he likes to be beaten) and decides to seduce him. This really disgusted me. Beatrice is often compared with Scarlett O’Hara but while both girls were obsessed with their lands and did some nasty things to keep them, Scarlett (who would never do half the things Beatrice did anyway) had known war, hunger and poverty. Beatrice, instead, is not driven by poverty, she’s not plotting and scheming cos she or her kids are starving, she wasn’t abused as a child… Simply, she’s just a horrible, despicable and vile lady who’s determined to get control of a stupid piece of land, even if that means destroying the lives of all those around her. She just doesn’t have a single good quality. None.

And we’re only at the beginning of the book. She will do a lot more nasty things as the story goes on (it has more than 600 pages!) but I don’t want to reveal too much in case you decide to read it. That’s the gist of it, anyway. It could have been different. She could have come up with other methods to manipulate her brother (I realize women didn’t have a lot of options at the time and sex is probably the quickest way but still I can’t help but think there must have been something, anything, else she could have done instead) or she could have been a good woman forced to do bad things because of the situation she was in. What a shame. The only thing that kept me reading is the curiosity to find out whether she would get her comeuppance or not in the end. But to know that, you’ll have to read the book.

Summary:
To say that Wideacre by Philippa Gregory wasn’t my cup of tea would be an understatement. The “heroin” of the book, Beatrice is a selfish and spoiled woman who won’t stop at nothing, including murdering people and having sex with her brother, to keep living in the house she grew up in. The incest takes up a huge chunk of the book which is why, unless you have a very high tolerate for ickiness, you’ll have to read it in small doses. But then there are lots of better books you could read instead that I can’t really recommend this to anyone..