I have two history books, one more engaging than the other, to introduce to you today. So, let’s get started:

Rome’s Revolution: Death of the Republic & Birth of the Empire by Richard Alston
On March 15th, 44 BC a group of senators killed Julius Caesar, hoping this way to save the Republic. Instead, they unleashed a revolution that plunged Rome into civil war and led, eventually, to an absolute monarchy. How was this possible?
In his new engaging book, Alston tries to answer that question. Using primary sources whenever possible, he provides fascinating insights into the minds of the men involved in this process of change, both the main figures and leaders such as Augustus, Octavian, Brutus, and Cicero, but also the soldiers and common people who, over the course of the years, became more and more accepting of an absolute monarchy. He also investigates the events that have prompted these people to act the way they did, and sets the record straight on some of the myths that still circulate about this period.
This was a brutal and complex time in the history of Rome. Alston skilfully manages to convey the violence and uncertainty of the period. And he does so in an engaging, almost friendly tone. This is no boring history book. You can feel how passionate Alston is about his subject. It shows through every page.
If you want to know more about this brutal but fascinating period in Roman history, I highly recommend you pick up this book. You won’t be able to put it down until you’ve reached the last page.
Available at: Amazon
Rating: 4/5 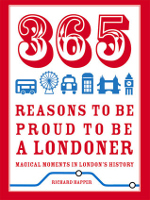 365 Reasons to be Proud to Be a Londoner: Magical Moments in London’s History by Richard Happer
London is my favourite city in the world. It’s exciting, fascinating, and steeped in history. Wherever you turn, you can see a piece of the past. Having just moved to London, I see one or two of them daily, but I don’t always know what they are and what they mean. There isn’t always a plaque to tell you. But since picking up this book, I discovered the history behind a few of them. And a lot more.
The book features 365 historical events and people that made London special. One for every day of the year. Each entry is short (only a few lines), but concise, straight-to-the-point, and funny. This is not a book for academics (at least not for those academics without a sense of humour). It’s aimed at the casual reader who wants to know more about the British capital in a fun way that won’t put him to sleep after a couple of minutes. If that’s you, you’ll love this book.
Available at: Amazon
Rating: 4/5

Are these books tempting you?