today I’m reviewing a romance based on the Arthurian legends, the biography of one of the most controversial artists of the 19th century, and a guide to help you find the job you’ve always wanted. Here we go:

The Warrior Queen by Lavinia Collins
The first book in the Guinevere trilogy, The Warrior Queen is an enthralling new take on the Arthurian legends. The story, told through Guinevere’s eyes, begins with the defeat of her people in a war in which her mother, her brothers, and her fiancé were killed. The winner, the boy-king Arthur, now demands the hand of Guinevere in marriage. The young woman detests the boy who causes her people so much pain, but has no choice in the matter. But when she meets Arthur, something unexpected happens: she learns to like, even love, him. Quickly, she settles into a calm and serene existence as Arthur’s Queen, which is disrupted by the arrival of Lancelot.
Collins skillfully intertwines legends and magic with historical realism. The world she creates is, obviously, fictional, and yet it feels very real and vivid. It’s full of witches, intrigues, plots, knights, conquerors, love, and quite a bit of sex too! It’s just got everything that a great story should have.
The characters are well-rounded and easy to relate too. Especially Guinevere. Here, she’s not the passive woman portrayed in most versions of the Arthurian legends. On the contrary, she’s strong, brave, passionate, and torn between duty to her husband and his kingdom and her love for Lancelot. It’s a wonderful portrayal that really humanizes her and vividly brings her to life.
The book is beautifully written and very entertaining. It’s truly a pleasure to read. I devoured it in just a couple of days cos I wasn’t able to put it down. Now I can’t wait to read the next two installments!
Available at: amazon
Rating: 4/5

Whistler: A Life For Art’s Sake by Dan Sutherland
A good biography is a lot more than a simple, albeit comprehensive, cradle to grave account. A good biography makes its complex subjects, with all their flaws, foibles, and merits, come to life. That’s what Dan Sutherland does in Whistler: A Life For Art’s Sake. The 19th century American painter, who spent most of his life in London and Paris, is both an undisputed genius and a very controversial figure in the art world.
If you approach this book thinking that Whistler was nothing more than a dandy and a selfish-egotist, think again. Sutherland doesn’t gloss over Whistler’s faults, but, putting him in the context of his time, and with the help of his extensive correspondence, tries to understand both the man and the artist. The result is one of the most intriguing and intelligent biographies that I read in a long time.
Whistler’s art was revolutionary and highly influenced the painters of his, and the next, generation. But, when it came to his work, he was also very controlling, demanding to decide everything, from how to hang his works in exhibitions and their prices, to the contents of any books written about him and his art. He often engaged in legal battles with art critics, as well as fellow artists, who didn’t understand his art and expressed poor opinions about it. His intransigence also cost him several friends, including Irish writer and poet Oscar Wilde. Instead, he always had a profound admiration and affection for John Everett Millais and was great friends with Dante Gabriel Rossetti. The Pre-Raphaelite gang, as well as the Impressionists in France with whom Whistler was close to, and the strict and conventional art societies of the time, are also well-portrayed, bringing to life the artistic world the painter lived in.
The biography is very comprehensive and detailed. It’s obvious the author has done his research, and consulted any scrap of information he could get his hands on. And yet, it’s not a boring read at all. On the contrary, Sutherland writes in a very engaging and straightforward manner that makes the book flow easily.
The biography is also widely illustrated, featuring more than 100 images of Whistler’s works. That way, whenever Sutherland describes a painting or an etching, the inspiration behind them, and the techniques with which they were created, you can take a look at the work in question and see the finished result. In my opinion, this makes the book even more of a pleasure to read.
Whether you are a fan of Whistler, or think he was just an untalented and unpleasant man, I highly recommend you pick up this book. It’s, so far, the definitive biography of the American artist, and provides a fascinating insight into the man, his art, and his world.
Available at: amazon
Rating: 4/5 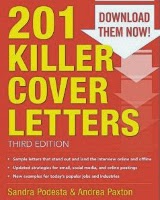 201 Killer Cover Letters by Sandra Podesta & Andrea Paxton
Are you looking for a job? Or hate yours and would like a new, better one? Or know someone who does? Then check out 201 Killer Cover Letters by Sandra Podesta and Andrea Paxton. True to its name, the book really features that many covers letters, suitable for any occasion and type of job, that have impressed recruiters. If you don’t know what to write in yours, this is a great resource for templates and ideas to create a cover letter that will make you stand out, and get you an interview. And afterwards, use the tips in the book to write another letter to keep in touch with your recruiter. Most people don’t bother, so, if you go the extra mile, you will get noticed. And, once you got the job, it’s time to write again. This time to all the people who have helped you in your job search.
In addition to providing tips on how to write all these types of letters, the authors also stress out the importance of networking to find out about new job opportunities that aren’t advertised in the papers, or be introduced to people that can give you advice to succeed in your desired industry, or even give you a job. You’ll also learn how to use social media, especially Linkedin, to get the job of your dreams. Highly recommended.
Available at: amazon
Rating: 5/5

Would you like to read any of these books?