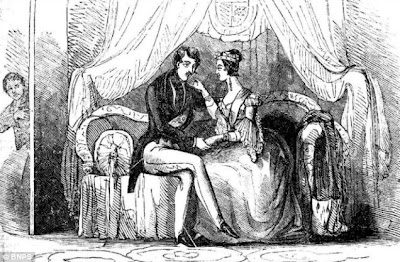 Did you know that Queen Victoria had a stalker? His name was Edward Jones, although he was nicknamed Boy Jones, probably on account of his young age (he was about 14 when he was first arrested), and he frequently broke into Buckingham Palace. In her book, Queen Victoria, her girlhood and womanhood, Grace Greenwood recalls his “career”:

The next sensation in connection with the Court was the discovery of the famous “boy Jones” in Buckingham Palace. This singular young personage was by no means a stranger in the Palace. He had made himself very familiar with, and at home in that august mansion, about two years before. He was then arrested, and had lived an exceedingly retired life ever since. On that first occasion he was discovered by one of the porters, very early one morning, leisurely surveying one of the apartments. He was caught and searched; nothing of any consequence was found on him, but in a hall was a bundle, evidently made up by him, containing such incongruous articles as old letters, a sword, and a pot of bear’s grease.

He had he appearance of a sweep, being very sooty, but disclaimed the chimney-cleaning profession. He had occupied, for a while, the vacant room of one of the Equerries, leaving in the bed the impress of his sooty figure. He declared that he had not entered the Palace for the purpose of theft, but only to gratify his curiosity, as to how royal people and “great swells” like royal footmen, lived. The young rascal’s examination before the Magistrate caused much amusement. In answer to questions, he admitted, or boasted that he had been in the Palace previously, and for days at a time—in fact, had “put up” there—adding, “And a very comfortable place I found it. I used to hide behind the furniture and up the chimneys, in the day-time; when night came, I walked about, went into the kitchen, and got my food, I have seen the Queen and her ministers in Council, and heard all they had to say.”

Magistrate: “Do you mean to say you have worn but one shirt all the time?”
Prisoner: “Yes; when it was dirty, I washed it out in the kitchen. The apartment I like best is the drawing-room.”
Magistrate: “You are a sweep, are you?”
Prisoner: “Oh, no; it’s only my face and hands that are dirty; that’s from sleeping in the chimneys…. I know my way all over the Palace, and have been all over it, the Queen’s apartments and all. The Queen is very fond of politics.”

He was such an amusing vagabond, with his jolly ways and boundless impudence, and so young, that no very serious punishment was then meted out to him, nor even on his second “intrusion,” as it was mildly denominated, when he was found crouched in a recess, dragged forth, and taken to the police-station. This time he said he had hidden under a sofa in one of the Queen’s private apartments, and had listened to a long conversation between her and Prince Albert. He was sent to the House of Correction for a few months, in the hope of curing him of his “Palace- breaking mania”; but immediately on his liberation, he was found prowling about the Palace, drawing nearer and nearer, as though it had been built of loadstone. But finally he was induced to go to Australia, where, it is said, he grew up to be a well-to-do colonist.