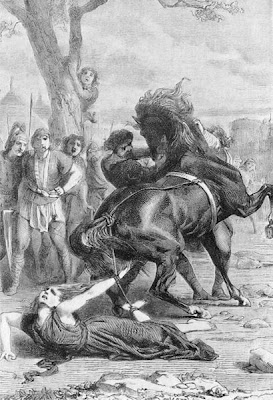 Brunhilda, born around 543 in Toledo, was the youngest daughter of Athanagild, the Visigoth King of Spain, and his wife Goiswintha. Brunhilda and her sister Galswintha grew up and were educated in Toledo, where they remained until old enough to marry. Brunhilda was the first to tie the knot. In 567, she married Sigebert I of Austrasia (comprising parts of the territory of present-day eastern France, western Germany, Belgium, the Netherlands and Luxembourg), who was enchanted by his wife’s beauty, intelligence and virtue. Soon, the couple fell in love. They had three children, Ingund, Chlodosind, and Childebert.

Her sister Galswintha wasn’t so lucky. She married Sigebert’s brother Chilperic, King of Neustria (a kingdom next to Austrasia in France), a libertine who had bedded numerous women, some of which gave him children. His latest concubine was a serving woman named Fredegund. But upon his marriage he was asked to rid his court of concubine and prostitutes, which he did. For a little while. He soon tired of his wife and resumed his affair with Fredegund. She urged Chilperic to kill his wife and one day, Galswintha was found dead in her bed. A few days later Chilperic married Fredegund.

Brunhilda wanted revenge and convinced her husband to go to war against his brother. Sigebert wasn’t too fond of Chilperic anyway so he didn’t need much convincing. A peace of sorts was achieved for a few years, but Chilperic then broke it by invading Sigebert’s territories. War broke out and Sigebert won. Chilperic fled to Tournai, which Sigebert set out to besieged. But he was killed with poisoned knives by two clerks sent by Fredegund. Brunhilda was then imprisoned in Rouen. All seemed lost for the Queen until one day Merovech, the son of Chilperic and his first wife Audovera, visited her. He was charmed by Brunhilda and married her. Because the bride was the groom’s aunt, the marriage was contrary to canon law but before it could be annulled Merovech helped Brunhilda escape. 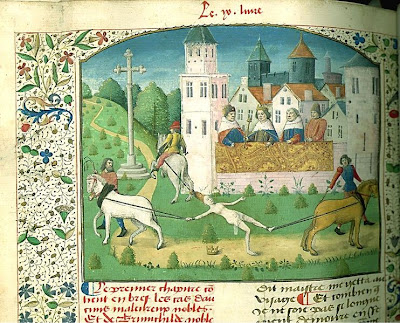 Now free, she became Regent of Austrasia in the name of her son Childebert II. She reorganized the royal finances, restructured the royal army, built fortresses, churches and abbeys and repaired the old Roman roads. However, the nobles resented to be ruled by her and so, to strengthen her position, she convinced the heirless Guntram, her late husband’s brother, to adopt Childebert as his son and heir. In 583, Childebert came of age and started ruling Austrasia in his own name, and in 592, upon Guntram’s death, he succeeded him on the throne of Burgundy. Chilperic was dead too and soon, the hostilities between Brunhilda and Fredegund and their children Childebert and Clotaire II started again. War again broke out.

But in 595 Childebert died and Bruhilda tried to seize the regency of Austrasia and Burgundy in the name of her grandsons Theudebert II and Theuderic II, respectively. Fredegund died too, in 597, but this didn’t stop the hostilities between their kingdoms and war still raged on. Two years later Theudebert exiled Brunhilda from his kingdom. She was found by a peasant who brought her to Theuderic. He fell under her influenced and decided to wage war against his brother to avenge her. He defeated Theuderic but, threatened by their common enemy Clotaire, decided to become allies again.

In the meantime, Brunhilda stirred up more trouble. She took a lover, Protadius and, to make him mayor of the palace, had Berthoald, the man who held that office at the time, killed. The lovers urged Theuderic to go again to war against his brother. But the people had had enough of fighting to satisfy Brunhilda’s thirst for vengeance. A long time had passed since her sister had been murdered and the crime had been forgotten by most people. But the horrors of war they remembered all too well. The Duke Uncelen so ordered the murder of Protadius. To avenge her lover’s death, Brunhilda had the Duke executed. She had also had Desiderius, the Bishop of Vienne, assassinated because he had had the audacity of publicly accusing her of cruelty and incest.

But Theuderic had gone to war again with his brother. He defeated and captured Theuderic, which was sent to a monastery by Brunhilda. He, and his son Merovech, were then murdered, probably on Brunhilda’s orders. Theuderic was now king of both his and his brothers’ domains, but he didn’t enjoy them long. He died soon afterwards of dysentery. Brunhilda became regent for the third and last time, this time in the name of Theuderic’s bastard son and only heir, Sigebert. But the nobles wouldn’t stand for that. They joined arms with Chilperic to overthrow Brunhilda. The young king was killed. Chilperic was now ruler of both the kingdoms of Neustria and Austrasia. He accused Brunhilda, now almost 80 years old, of having caused the death of ten kings of the Franks. Her punishment was death. She was led through the entire army on a camel. Then, her limbs were tied to wild horses, which tore her apart.