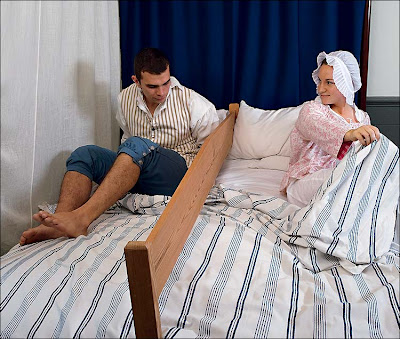 These days, thanks to mobile phones, emails and skype, we can easily and often communicate with our sweethearts even when we find ourselves on the opposite sides of the ocean. But it wasn’t always like this. In the past, even when a couple lived only a few miles apart, seeing each other was difficult. Men had to walk miles, or ride a horse, to reach their lover’s house, which could take hours. In winter, with the inclement and frigid weather, things were even worse and, once a man arrived at his destination, it wasn’t always possible for him to go home until the next morning. The rooms were cold, the houses small and there just weren’t that many beds. Thus, it made sense for the two lovers to bundle up together in bed at night.

This practice was called bundling, but also “courtship in bed” in England, and tarrying in the United States, and was practised mostly by the lower classes. And apart from practical reasons, it also served another important purpose. It allowed the couple to get to know each other better. The man had the consent of the girl’s parents to share a bed with her so that he could court her. The couple would take off their outer garments, and keep only their underclothes or a shift on, to prevent any “illicit” activity. Other methods to prevent the couple from having sex were placing a low board or a bolster in the middle of the bed, or even tying the girl’s ankles together. They were supposed to talk all night, and nothing more.

But of course, when you put two young people who fancy each other in bed together, it is to be expected that they won’t remain chaste for long. In fact, wherever the custom of bundling prevailed, the bride usually gave birth to a child only a few months after the wedding. This doesn’t seem to have been a very big deal though, because usually when two people bundled in bed together, their relationship was already serious and a marriage was likely to follow anyway. In any case, if a woman got pregnant after bundling, the man had no choice but to make an honest woman out of her.

However, not every couple that bundled in bed together was already talking of marriage. In some parts of America, they’d decide whether to get hitched or not after spending the night together. The Reverend Andrew Burnaby thus described the practice in his book, Travels in North America, published in 1775:

A very extraordinary method of courtship is sometimes practiced among the lower people in Massachusetts Bay, called Tarrying. When a man is enamoured of a young woman and wishes to marry her, he proposes the affair to her parents, without whose consent no marriage in this colony can take place. If they have no objection, they allow him to tarry with her one night, in order to make his court to her. At the usual time, the old couple retire to bed, leaving the young ones to settle matters as they can; who, after having sat up as long as they think proper, get into bed together also, without pulling off their under-garments, in order to prevent scandal. If the parties agree, it is all very well; the banns are published, and they are married without delay; if not they part, and possibly never see each other again; unless, which is an accident that seldom happens, the forsaken fair one proves pregnant, and then the man is obliged to marry her, under pain of excommunication.

This practice also a biblical basis. In the Book Of Ruth, it is written that Ruth and Boaz laid together on the floor all night and later, they were married. However, not everyone condoned bundling. In 1869 in New York, the parents of a young girl sued a man for seducing her. The court ruled: “that although bundling was admitted to be the custom in some parts of the State, it being proven that the parents of the girl, for whose seduction the suit was brought, countenanced her practising it, they had no right to complain, or ask satisfaction for the consequences, which, the Court say, naturally followed!”